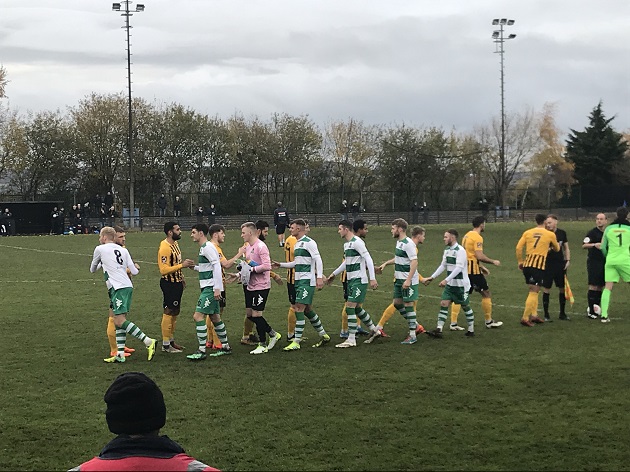 The Celt Army twice fought back from a goal down, however failed to make their numerical advantage count as the visitors struck twice in the final 20 minutes against the run of play.

Farsley Celtic Manager Adam Lakeland cut a frustrated figure after the game, as he said:

“I have to say our defending in that second-half was terrible, the goals were too easy, I’ve spoken about them with the players in there.

“It’s nowhere near good enough defending, letting them get in with ease, because I’ve actually felt we’ve played really well there over 90 minutes, and in the second-half we were certainly the better team.

“When it went to 2-2, you felt like we were the team in the ascendancy and that we’d go on and win it, there’s still 25 minutes to go at that point. They’ve obviously made a change and brought (Jay) Rollins on, with a bit of extra pace up top.

“If you concede four goals you don’t deserve to get anything out of a game of football, we’ve been a bit naïve there.

“We’ve lost the game because our defending wasn’t good enough in the second-half, but the referee’s performance was embarrassing, and I feel sorry the assessor!”

After a scrappy opening to the game, the visitors were awarded a penalty midway through the first-half as Will Hayhurst was adjudged to have handled in the box, with Jordan Thewlis converting.

Within three minutes Farsley had struck back through Jimmy Spencer, the forward finding space in the box and superbly heading home Will Hayhurst’s delivery.

Farsley had a couple of half-chances before the first period drew to an end, but came within inches of taking the lead just a minute into the second-half as Spencer crossed from the right for Nathan Cartman whose volley was superbly tipped onto the crossbar by Peter Crook.

The Pilgrims then retook the lead against the run of play, Jordan Thewlis flicking the ball on for Dominic Knowles who kept his cool to slot home.

The Celt Army hit back once again just minutes after falling behind, as Adam Clayton was felled in the box by Crook, with Will Hayhurst firing home the equaliser from the spot.

What appeared would be a decisive moment came just minutes later, as Boston’s Martyn Woolford received his marching orders after lashing out off the ball.

However, Farsley were unable to take advantage of the extra man and it was in fact Boston who went in front when substitute Jay Rollins broke clear and went down under the challenge of Tom Allan in the box.

The referee pointed to the spot, and Jordan Thewlis converted his second penalty of the afternoon.

Adam Clayton collided with the advertising hoardings with around five minutes remaining and was unable to continue as his side were forced to finish the game with 10 men, before the man advantage was reinstated when Boston’s Demeaco Duhaney received a second booking for kicking the ball away.

The best chance for the Celt Army to draw level came in the 90th minute as Will Hayhurst’s corner fell in the box, and somehow Boston cleared as no-one was able to get a shot away.

And the Pilgrims wrapped up the three points in the third minute of added time as they caught Farsley short at the back, with Brad Abbott slotting home when one-on-one with Kyle Trenerry.

Bramley Buffaloes ‘A’ fall agonisingly short in a 14-try thriller