New Wortley Community Centre has won a top international design award – but centre manager has warned of the need for more investment in the area.

The centre, which has more than doubled in size with a new £680,000 extension built alongside the old one, is one of two winners in the ‘Live Projects Network’ category of the prestigious 2017 Social Economic Environmental Design (SEED) Awards.

“The award is a terrific accolade for the community and the project team to be recognized globally for the co-produced way the building evolved.

“The residents of New Wortley have great talent and deserve more investment to reach their potential. This award reinforces our belief in our ideas and plans to transform this part of Leeds.” 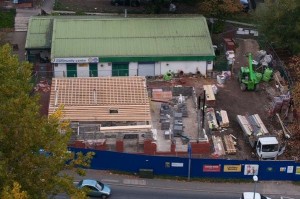 Leeds Beckett University academics, Simon Warren and Craig Stott, have led the project every step since plans began in 2009, before taking it on as their first major commission after founding the University’s Project Office back in 2013. Guided by Project Office, Leeds Beckett students were also instrumental.

As one of two winners, they will travel to Portland State University in Oregon, USA, in April to present at the 17th annual Structures for Inclusion conference, where they will receive their award. Simon said:

“We are astounded. Receiving this award from the live project community means that architecture live project work at Leeds Beckett is now becoming recognised internationally. Leeds Beckett University’s Project Office and students have been working with the New Wortley community for more than seven years to help realise this project. I think that the judges have understood and rewarded the collective commitment of all participants: it’s an award for all!”

Project Office, which is run by Simon and Craig, was formed as an architectural consultancy and sits under the umbrella of Leeds Beckett University’s School of AAD, giving students at the University a chance to work with real clients, producing built and strategic design solutions with a particular emphasis on ethical, social and resilient architecture.

A total of 196 people took part in the project. From New Wortley locals to undergraduates, postgraduates and staff from Leeds Beckett, plus professional consultants and contractors.

In a statement, the awards gury said:

“The New Wortley Community Centre project has empowered all actors involved, realising their shared vision in a meaningful and sustainable way. The Project Office was key to this success, coordinating the energy and potential of both the community and Leeds Beckett University. We commend their evolution and implementation of such a coherent design strategy in a complex and fluid context.”