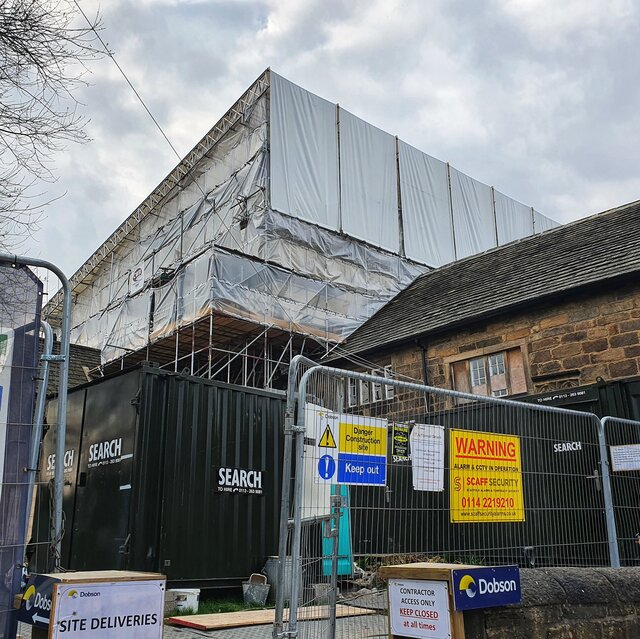 The latest stage of work on Calverley’s historic Old Hall has seen the entire roof covered with scaffolding and a massive canopy – and led to a few quirky historic discoveries.

In an update from the Landmark Trust, which owns the hall, Engagement Manager Vicky Thompson said that the Trust had secured funding from the Government’s Culture Recovery Fund to carry out essential work on the dilapidated roof. This means the rare 16th century wall paintings discovered last year can be protected while the work continues.

She said the canopy had to be high enough to cover the chimneys. Contractors are carefully removing the roof tiles, saving them wherever possible for replacement once the timbers have been replaced.

Some of the timbers themselves date back to the 16th century and were salvaged by workers in the 19th century.

While repairing the roof, the contractors found a number of curious objects and artefacts which are being carefully catalogued by the trust’s archaeologist.

Two 19th century clogs have been found, one child’s size and one a little bigger. Both were beautifully crafted from leather with a wooden sole. Shoes were often built into houses as good luck charms.

Vicky said they would record the details of the shoes, photograph them, and then replace them where they were found, to continue offering their luck to all those who spend time in and around Calverley Old Hall.

In the process of lifting, recording and removing the stone pathway which led to the door of Calverley Old Hall lettering was found on the reverse of a slab half buried in the ground. Vicky said it was another mystery thrown up by the Old Hall.

Read more of our coverage on Calverley Old Hall here.