Long read: Leeds highway chief on Stanningley Road one plus lane, mass transit systems and hitting back at critics

£10 million plans to transform the A647 Leeds to Bradford corridor and give buses priority have split opinion since they were given the green light earlier this month.

The council pledged scrap the road’s high occupancy vehicle (HOV) lane, which can only be used by cars containing two or more people, as the rule was ‘impossible to enforce’.

The measures, part of the £270 million Connecting Leeds project to improve transport, are expected to reduce journey times by 10 to 15 minutes. Council chiefs hope the measures will help reduce congestion through a dedicated bus lane and improvements at key junctions.

But opposition councillors and social media critics have said the changes could displace vehicles and cause even more congestion on the route.

West Leeds Dispatch met with the council’s highways chief Richard Lewis (Lab, Pudsey), who was keen to hit back at critics on some of the issues raised.

One of the common criticisms of some of Leeds City Council’s transport policy on social media is that it’s ‘anti-car’. Is it? Cllr Lewis responded:

“Not at all. We do a lot of road infrastructure schemes here in Leeds. People think that we don’t, but there’s Rodley and Thornbury Roundabouts, Horsforth Roundabout, the East Leeds Orbital and the refurbishment of the Inner Ring Road. We’ve got Armley Gyratory and Dawsons Corner in the pipeline.

“The Jeremy Clarkson wing of the motoring lobby seems to think that we are there to stop cars, which is crazy.

“If you look at the projects in Leeds, we’ve carried out highways improvements, new railway stations, cycle infrastructure – it’s a real mix.

“We did a lot on consultation on this scheme and the figures are fairly balanced in terms of people who supported it and people who expressed concern.

“When we started with the Elland Road park and ride, people said it would never work, people will never get out of their cars to use it, it’s another ‘Lewis vanity project’. But they have – we’re on the third extension now. It works for the city. People now aren’t polluting the air and taking up road space going right into the city centre.

“The truth is people don’t want change but unless there is change the city will grind to a halt. We will have more and more days when any little incident will ripple out and close the whole city down. It’s about the lost hours of people’s time and the lost productivity in the city.”

“On the A647 I think we have a good, balanced scheme. People are focusing on the HOV Lane, and in many ways that’s not the most important part – the scheme would almost work if we just kept it the way we have it now. People haven’t picked up on the improvements at Mike’s Carpets in Armley, which will suck traffic through and create capacity – people aren’t reading about the whole scheme, they’re obsessing about the HOV lane.

“We just weren’t able to enforce the lane as it is. A third of traffic was in there under false pretences, which is unfair for the law-abiding motorists.

“As you get down to Armley Park and the bend there, cars slow down to about 15 miles an hour, there’s two lanes merging into one, a pedestrian crossing and the lights at Mike’s Carpets – ultimately everybody loses time there. The removal of the merge and improvements at Mike’s Carpets will speed traffic through that area much more efficiently.”

Cllr Lewis says the bus lane will cater for 1,500 people carried on buses per hour at peak times.

Bottlenecks are a problem

Some argue that the way to avoid cars idling and polluting is to create more roads or lanes. But Cllr Lewis argues:

“You could put a six-lane highway and take out some of Armley Park, but you will always hit some sort of bottle neck somewhere along the road, and that’s what causes the delays.

“The council could pay millions to buy up houses and buildings to ensure the highway runs smoothly, but there’s always a bottleneck somewhere – it’s inevitable due to the lack of space we have around our roads. It’s too simplistic to say that it keeps traffic moving, it just gets you to the next bottleneck.”

What use is a bus lane if buses aren’t up to it?

Cllr Lewis says he recalls public meetings in Pudsey a couple of years ago, where angry bus users bombarded FirstBus chiefs with questions due to unreliable services. What’s the point of the council creating bus lanes if the services are so unreliable? Cllr Lewis says:

“You can only do what you can do. We’re aiming to create the environment where buses can run more freely. Our scheme should ensure that up to 15 minutes is shaved off each bus journey which, if you think of a commuter over five days, mounts up substantially. And the scheme doesn’t increase car journey times for most, it’s important to stress that, too.

“Doing things like this makes bus journey times quicker and increases reliability of services. There’s a huge benefits for people stood at, say, Pudsey Bus Station, who need certainty and confidence that their bus is going to turn up on time.”

Some on social media have suggested that it was inevitable that Leeds City Council will introduce a congestion charge. When Cllr Lewis is asked he doesn’t give a yes or no answer, but does say:

“I would far rather we were encouraging people to go onto public transport than into parking or congestion charging. People are struggling at the moment as the services can be unreliable.  People get into trouble for being late to work.

“But there are people who would like to use the bus, I think the millennials are prime examples of this. We want to change it around and have a good service, which means roads which are less congested.”

A previously reported, there are early plans for a proposed mass-transit system in the region, which would coincide with the planned arrival of HS2 in 2033. 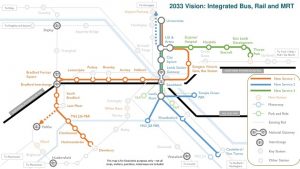 West Leeds could benefit from one of three new lines which could be built from Leeds city centre out into neighbouring areas.

Early plans – dubbed as ‘the start of a conversation’ by transport chiefs – feature a route that could run from Leeds city centre to Holbeck, Armley, Bramley and Pudsey before heading into Bradford and North Kirklees, ending at Dewsbury. Cllr Lewis said:

“A Leeds to Bradford route which will cut through West Leeds is incredibly welcome. Whatever mass transit system we have it won’t be the tram that people usually think of. Technology has moved on hugely since the days of Supertram.

“This is the corridor that links one city to another. The demand for a mass transit system is there. The roads are getting busier and busier. It’s going to be massive for places like Armley, Bramley and Pudsey to have this on their doorstep.

“There’s under-utilised railway space coming out of both Leeds and Bradford, in between we have Stanningley Bypass, which you could accommodate a mass transit system alongside without disruption to housing.

“If Leeds is going to be a healthy, pleasant city do we really need to go down the Los Angeles model and say we have a car, I’m going to sit in it and get stuck in traffic jams in it? Can we look at people cycling, using buses or mass transit?”

The council says the public transport benefits of the A 647 scheme will be a quicker and more consistent journey time, and help reduce congestion through a dedicated bus lane and improvements at key junctions. If approved, it is hoped these new measures will encourage more people to travel by bus further reducing congestion.

Already on this route almost 70,000 people live within walking distance of a bus stop and every day 24,000 bus trips are made along the Leeds – Bradford route. These improvements will contribute to the target of doubling bus patronage over ten years, which could see 5,000 cars taken off the roads, as well as improving air quality.

The council says proposals will help to eliminate bus delays of up to 10 minutes for services on this stretch of road.

Proposals include converting the left lane in each direction to a bus lane and restrict on-street parking during the hours the bus lane is operational.

In a bid to save two minutes’ bus journey time, proposals include:

In a bid to save five minutes’ journey time for all traffic and the elimination of bus delays of up to 15 minutes, proposals include:

“Surveys show one in three vehicles using the ‘2+’ lane are doing so illegally and enforcement by the police has not been effective. This delays all traffic as motorists using the right lane are forced to give way to traffic merging at the end of the ‘2+’ lane section.”

The cycle superhighway will be untouched.

View the proposals in full here.

Proposals up for consultation aim to make average journey being four to five minutes quicker for all traffic, a higher quality pedestrian environment and a new gateway to Armley.

View the proposals in full here.

The proposals will eliminate bus delays of up to 18 minutes:

More on the city-wide Connecting Leeds proposals can be found here.