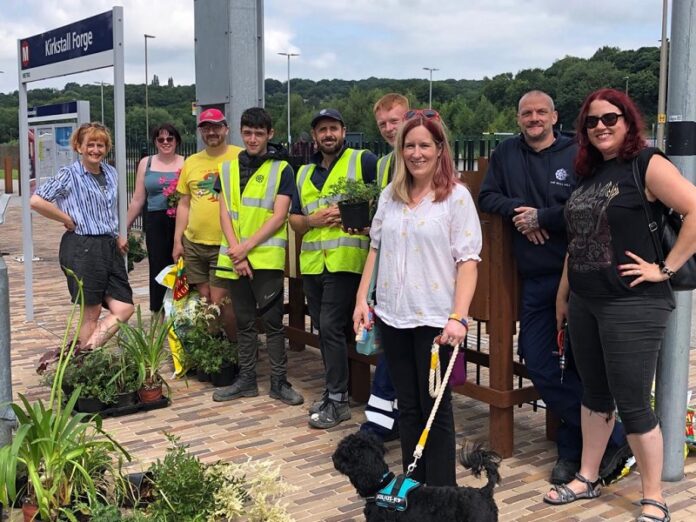 Kirkstall Forge Railway Station has received a colourful overhaul by Kirkstall in Bloom volunteers and a team from developers CEG.

The floral makeover is part of Northern’s community adoption of its stations. Northern funded the plants and the volunteers planted seasonal blooms to make the arrival at Kirkstall Forge station as attractive as possible.

Young ex-offenders from The Skill Mill social enterprise, which provides employment and workplace opportunities, helped to build the planters.

CEG has partnered with The Skill Mill since 2016 and has continued to fund the scheme, helping provide training and skills on site as a prelude to apprenticeships and new jobs.

“Kirkstall in Bloom has been working in our community since 2012 and we were delighted to get involved with the station adoption scheme and look forward to working with CEG and Northern Rail in the future.”

“Myself, local groups and interested residents have formed a Friends of Kirkstall Forge railway station group and are working on an action plan to improve the welcome for the local community, visitors and workers.

“We had a successful planting weekend and hope everyone reaps the benefits.”

“The station looks absolutely fantastic, thank you to the volunteers for all their hard work. Our community partners are the heartbeat of the railway and we’re extremely proud to work closely with them to deliver such a wide-ranging positive impact for the north of England.”

“We’re very pleased to be part of this great project. all the young people got a real sense of achievement from their involvement and in making a visible benefit to the local community.”

Kirkstall in Bloom always welcomes new volunteers and can be contacted here.