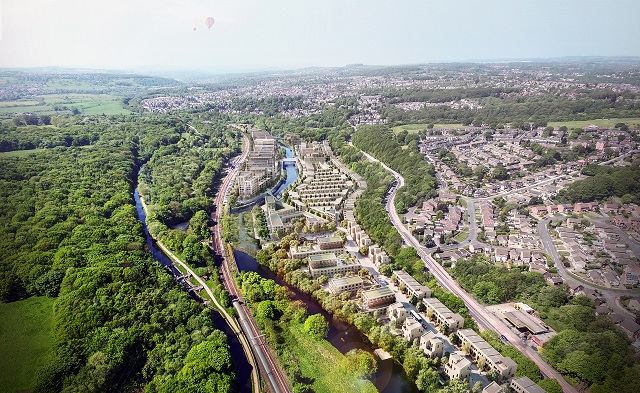 The first computer-generated aerial image of the entire Kirkstall Forge development has been released today.

Developers CEG released the image of the £400 million development the same week they secured the Project Award at the prestigious national Housing Design Awards, where the judges commended the contemporary design of the homes.

They particularly liked the unusual mews houses which use the topography of the site to deliver daytime living and garden space on the first floor and split-level studios and bedrooms above and felt the homes, combined with proposals for leisure, retail and office space, offer a smaller-scale trailblazer for the NHS’s Healthy New Towns programme.

“This is the first award we have secured for the residential element of the scheme and to do so in light of the incredibly tough competition is great news.”

This week CEG and FCB Studios also discovered that Kirkstall Forge is the only development in England outside of London to make the shortlist for the World Architecture Festival Awards.

Up against 15 other worldwide developments in the masterplanning category, Kirkstall Forge is showcased against schemes in Moscow, Vietnam, Saudi Arabia, Oslo, Paris and Shanghai. The awards celebrate inspiring outstanding architecture. The winners will be announced at the three-day festival in Amsterdam in November 2018.