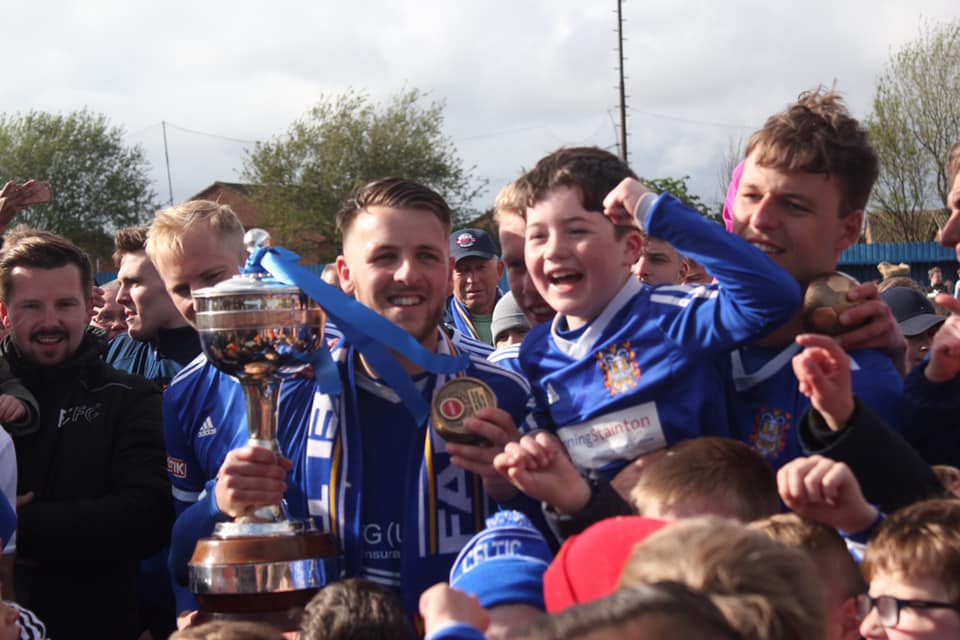 Nine years after the old Farsley Celtic went into liquidation and dropped to the fifth tier of non-league football, the new club have risen back to the National League North after winning the Evo-Stik Northern Premier Division title.

The Celts did it in style with a 2-0 victory over Marine, with a bumper crowd of 1,527 cheering Farsley onto their second promotion in three years.

Goals from Will Hayhurst and Jimmy Spencer earned their side the decisive three points, as beaten Marine were consigned to relegation despite a fighting performance.

“We weren’t great today, it was very nervy, very windy, but we knew coming into it if we kept a clean sheet, we were champions.

“I’m so proud of everybody, the staff, the players, the supporters, John Palmer. He saved this club, he put his life and so much money into trying to get it back, and I’m so proud that we’re the fortunate group that have managed to get back into the Conference North, it’s just an unbelievable day.”

The Celts’ captain Danny Ellis went on to add:

“It feels unbelievable, we set our target at the start of the season with an aim to win the league, and it’s been a tough season.

“We’ve been up there the last seven weeks and it’s just the icing on the cake. We’ve done it now, so it’s party time!”

The game got off to a quiet start, before Ben Atkinson came close for Farsley as he was played in by Kwame Boateng and dragged wide across goal.

Luke Parkin then had three chances in quick succession just after the half hour mark, the best of which saw Joe Hilton dive down well to his right to save.

With half-time approaching Farsley broke the deadlock to ease the nerves, Luke Parkin’s effort being deflected into the path of Will Hayhurst who rifled home from a tight angle.

The Celts suffered a scare just before the hour mark, as Jimmy Spencer’s back pass took an awkward bounce over Kyle Trenerry, but thankfully for the hosts it drifted wide.

Marine’s hopes of getting back in the game then took a blow, as Charley Edge lunged in on Adam Clayton, and received his marching orders for a second bookable offence, to no complaints.

The hosts looked to take advantage of having an extra man, and almost did so as Will Hayhurst’s deflected free-kick led to an almighty scramble in the box, culminating in Ben Atkinson’s effort being cleared. 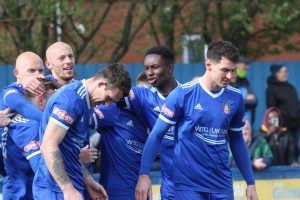 The decisive second goal came with 15 minutes remaining, as Chris Atkinson played a ball over the top for Nathan Cartman to run onto, and he unselfishly squared for Jimmy Spencer to slot home his 20th league goal of the season.

The visitors almost immediately got back into the game, as Kenny Strickland’s free-kick took a slight deflection and Kyle Trenerry did well to react and tip over.

It was then almost a third for Farsley as Danny Ellis saw a bullet header cleared over the bar on the line, before from the resulting corner Luke Parkin had a curling effort superbly tipped over by Hilton.

Parkin came close once again, as Will Hayhurst’s free-kick was cleared straight to the Farsley forward who drilled his effort from the edge of the box wide.

Farsley comfortably saw out the remaining moments to spark jubilant scenes after the final whistle, the Celts winning the league in style, winning 10 of their final 11 league games, and going unbeaten in all 11. 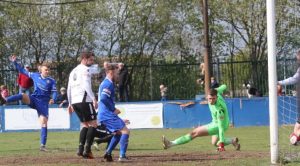 Verdict: Despite South Shields being favoured for the title almost all the way, Adam Lakeland’s Farsley side have beaten the odds by playing football the right way, and being strong at the back. Marine fought hard, but the Celts were just too strong on the day. 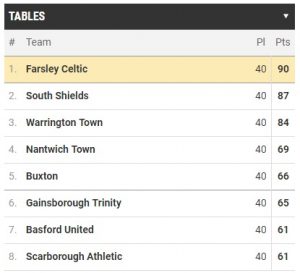