How you can remember the fallen in West Leeds this weekend

As well as the traditional services of remembrance there’s a night of World War 1 memories and a fundraiser in West Leeds this weekend. JILL BUCKLEY reports…

Bramley War Memorial was unveiled in August 2014 at the entrance to Bramley Park and is dedicated to the people of Rodley and Stanningley as well as Bramley. Since it was unveiled it has become a focal point for services of commemoration and remembrance.

The memorial lists the names of 741 people from the area who gave their lives for their country in conflicts from World War 1 up to more recent conflicts.

This weekend sees two services at the memorial. The first, to mark Armistice Day on Saturday the 11th, takes place at 10.45am, with an act of remembrance at 11am.

Then on Sunday Remembrance Day will be marked from 10.15am as people gather, with the service starting at 10.30am and act of remembrance at 11am. 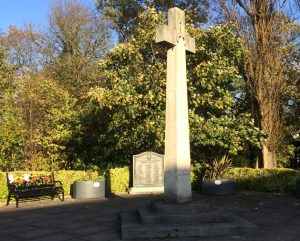 Reverend Stephen Kaye will be taking the service at Kirkstall War Memorial on Bridge Road at 2.30pm this Sunday. Plaques at the memorial commemorate the lives of 155 men from Kirkstall who lost their lives in World War 1.

Marsha and the team at The Black Lion are hosting several fundraising events between Friday 10th and Sunday 12th November, with monies raised going to Bramley War Memorial and the Poppy Appeal.

There will be a service of remembrance at Farsley Cenotaph at 1pm on Sunday 12th. Farsley war memorial carries the names of 91 men who died during the First World War and 34 in the Second World War. 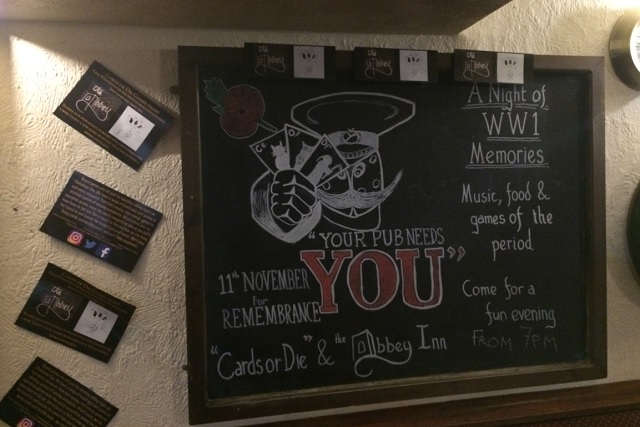 Join your host Martin and Ann from Cards or Die for a joint event to commemorate November 11th. The emphasis will be on remembrance of World War One; food from the period will be served with Surrey Stew and Trench Cake on offer and there will be music and games from the period. Fancy dress is most welcome and there are rumours of several suffragettes and Tommys attending! Donations are welcomed for Bramley War Memorial and the Poppy Appeal. You can find out more about what Ann at Cards Or Die does here. Or perhaps you’d like to try some World War 1 cooking at home?

Pudsey Cenotaph was built in 1922, paid for by local residents. The memorial lists the names of 341 people from the area who made the ultimate sacrifice.

As in Bramley, there will be two services of remembrance over the weekend. The first on Saturday will begin at 10.50 am with a short service and laying of wreaths followed by a two-minute silence at 11am.

On Sunday there will be a service of remembrance and parade beginning at 9.45 am when the parade will set off from the bus station and along Church Lane, reaching Pudsey Parish Church for a 10am service.

There will then be a service at the cenotaph and laying of wreaths at 10.50am with a two minute silence at11am before the parade heads back to the bus station along Church Lane.

All are welcome and there will be refreshments afterwards in the Royal Hotel on Station Street.

Simple service of remembrance at 11 at Farnley Cenotaph.