It’s just over a year since West Leeds Dispatch visited New Wortley Community Centre. Since then a new £680,000 state-of-the-art building has been largely completed – but the area surrounding the centre has hit the headlines for a string of problems with anti-social behaviour which led to a local shop being closed and, most recently, torched by arsonists.

Headlines last week suggested the Holdforths estate was ‘under siege’ by yobs. We met Bill Graham to discuss how the centre was trying to lead the area’s revival… 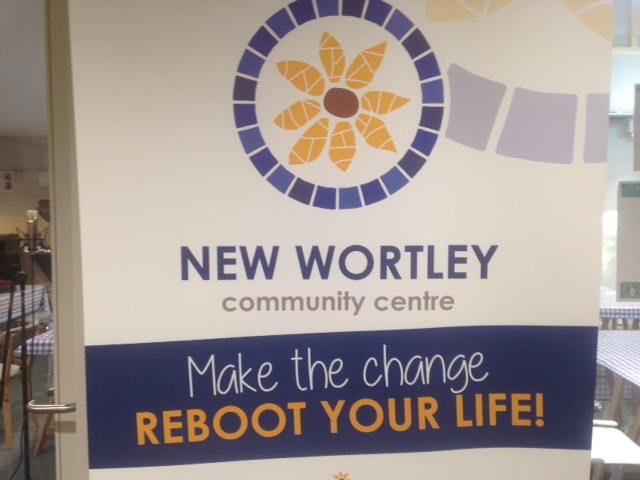 There’s a banner proudly on display at the heart of the brand spanking new building at New Wortley Community Centre which aptly sums up its aims: ‘Make the change – REBOOT YOUR LIFE!’.

The centre itself is an oasis of hope in the inner city area. It’s bordered by estates that have more than their fair share of problems, whether that’s the high levels of suicide from middle aged men in the flats through to big issues with anti-social behaviour in the Holdforths, The Clydes and The Bruces. Life expectancy in the New Wortley area is 10-12 years less than other parts of west Leeds.

The centre is one of the few run independently in Leeds, with project lead Bill Graham and the team of volunteers flat out trying to serve the needs of the area. Bill bristles with passion when asked about some of the area’s problems:

“The majority of people just want to get on with their lives and we can help them to do that. There are lots of really good people here and they deserve better. They deserve more investment in the area.

“We offer people the opportunity to grow in a range of ways, providing them with access to employment, to better themselves or to just get more involved with other people. The changes in people are always remarkable.”

The new £680,000 building, designed with the help of architecture students from Leeds Beckett University,  is already  starting to help pull more people in from the busy Tong Road which runs opposite. The impressive new building houses a variety of services including the café, meeting rooms and shop.

But it’s the ethos of the people that’s running the building that you feel will provide the ultimate beacon for the area, rather than the shiny building by itself.

A quick look at what’s on offer at the centre  highlights the importance of the work that’s going on there to turn around the fortunes of the community.

As I’m being shown around I meet a variety of workers and residents. They wax lyrical about the importance of the local walking group which is currently unfunded but gets people out and about, walking and socialising, which is great for mental and physical wellbeing.

People like Tim Dawtry talk enthusiastically about the recent Word Up West Leeds Festival which encouraged local residents to take up poetry and story writing with unexpectedly successful results. He’s currently working with a local resident to put together  a ‘New Wortley soundscape’ featuring people reading poetry, background noise from the centre, people’s conversations and music via local bands. You’ll love it when it’s finished!

Tim’s future plans include an arts project telling the story of the Battle Of New Wortley, which apparently is an early union fight for workers’ rights. The project will end up with a community performance of the event.

The local business forum gives businesses the chance to network – and they’re also encouraged to employ local people on a regular basis.

Schemes like breakfast clubs, zumba, luncheon clubs, PC repairs, positive communication groups. relaxation classes, table top games  groups, guitar lessons, music jams … they’re all here , with some run by workers and others by volunteers (or a combination of both.) A full programme can be found here.

One of the centre’s most important functions is the youth club, which takes young people, many of whom are ‘challenging’ and supports and helps them in a fun environment.

“They are challenging,” says Bill, who runs the group voluntarily with others. “They’re often people who have been involved in some of the area’s problems. It’s good to get them in here and we can work with them.

“There is, however, a group of young people who do feel disenfranchised and disengaged. I am disheartened at the lack of opportunity for these young people.”

The flames of indignation burn brightly in New Wortley. Residents can be forgiven for feeling they’re forgotten here.

One local woman told the Dispatch:

“The police come in and closed the lcoal shop which was attracting trouble. They only did it because some of their officers were attacked – there was problems for ages without it being sorted.

“I hear they’re trying to get the benches on Town Street removed now because of the street drinkers. Seems to be the only way they can sort stuff – closing it down or getting rid of it. What actually needs sorting are the problems in the area. Otherwise nothing’s ever going to change.

“People are frightened at the moment.”

The story is echoed by a man who lives off Hall Lane who’s had his garden fence destroyed, a brick thrown through his window and graffiti written on the walls of his house in the past few months.

One pensioner, who lives on the Avenues, stays up until 4am every morning because she’s too frightened to go to bed.

Residents around here are used to fighting for what’s right. As well as the aforementioned Battle of New Wortley, a section of the centre’s website is dedicated to residents’ campaign to get a crossing installed on Tong Road back in 1980, which led to a number of protests and arrests. Press clippings from the time tell the story in glorious detail.

New Wortley Community Association is a vocal community group which runs out of the centre. It’s championed local residents for several decades now and shows no sign of running out of steam.

Despite – or because of – the challenges volunteers are a staple of life at New Wortley. The number of regular weekly volunteers has doubled over the past year, drawn in by the facilities at the new centre, which is still not quite finished. A February official opening is likely, says Bill.

Much of the centre’s funding comes from places like the Lottery or funders from outside Leeds, which is another source of frustration for those at the centre who feel lmore help could come locally.

Whatever the future holds for the people of New Wortley, the community centre and the people inside it stand as a beacon of hope and positivity.