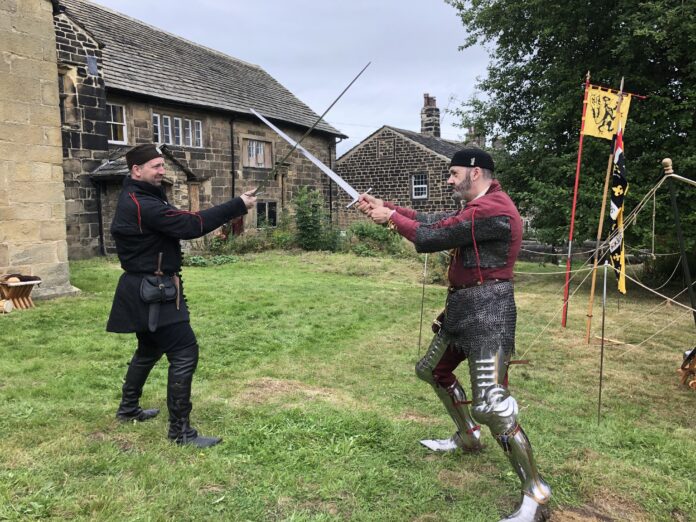 How can you have a building like this on your doorstep and not even know about it? That was the question I asked myself as I took part in the guided tour of Calverley Old Hall, one of the Heritage Week Events co-ordinated by Leeds Civic Trust.

The building itself dates back to the 12th century, when a family called Scot built a small stone hall house on the site.

Around 1300, they began to add to the building and it became much grander.

The Scot family renamed themselves the Calverleys and remained in ownership of the hall for the next 500 years.

Whilst the hall itself is now in a state of disrepair, the tour (led by volunteers from The Landmark Trust, a charity who is purposed with saving historical buildings and who owns Calverley Old Hall) allowed us to see many interesting historical features up close.

These included the huge stone fireplaces, the mostly original hammer-beam roof and the tracery of medieval windows.

The private chapel with its first-floor gallery is incredibly well preserved for its age.

The Calverley family were devout Catholics and their fortunes began to wane when Henry VIII embarked upon the dissolution of the monasteries.

The house and estate fell into a gradual decline, and the families fortunes suffered further when in 1605, Walter Calverley murdered his two small sons. “The Yorkshire Tragedy” resulted in Walter’s execution – by being pressed to death under heavy stones.

In 1754 the hall was sold to the Thornhill family. At this point the hall was divided into cottages and the remains of internal walls can still be seen. By 1862 11 families lived on the plot, which was described by the guide as “a village within a village.”

After a fire in 1977, the Thornhill Estate put Calverley Old Hall up for sale and in 1981 the Landmark Trust stepped in and began the long journey of restoring and reviving the whole site.

Sitting tenants were allowed to remain, with no major restorations planned until the building was completely vacant – and when funds allowed!

The last tenants have now gone, so plans are afoot to bring the hall back to life. While surveying and assessing the building recently, historians and architects discovered extensive, and extremely rare, Tudor wall paintings, hidden behind early 20th-century lath and plaster.

Pictures of these were on display during our tour, but unfortunately we were unable to view them first hand until the conservators have decided how best to preserve them.

The icing on the cake on this fascinating tour of this overlooked treasure was the presence of historical re-enactment company Frei Compagnie and music through the ages from The Leeds Waits, both of whom gave added authenticity and excitement to the event.

This was the last real opportunity to see the building in person before an ambitious renovation takes place. This will turn Calverley Old Hall into a holiday rental property – and will be a rare opportunity for The Landmark Trust to make an historic property that is both accessible and renovated with sustainability in mind.

You can see a virtual tour of the building here.