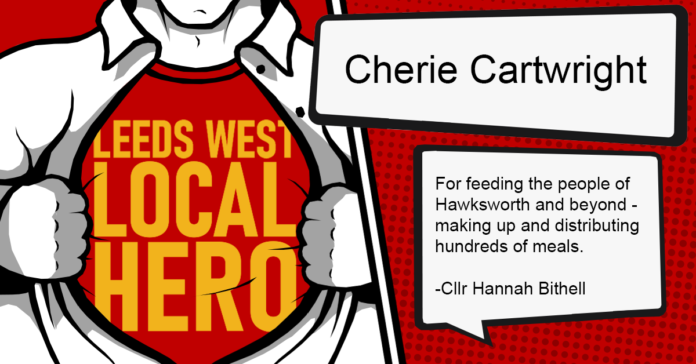 Cherie Cartwright has been named as the latest recipient of the West Leeds Local Hero award, writes Jo Fiddes.

The awards were started last month by MP Rachel Reeves, who wanted to publicly recognise individuals who have gone above and beyond, and enriched their local community through acts of kindness and generosity.

All winners have been nominated by members of the public – in Cherie’s case, the nomination came from Kirkstall Councillor Hannah Bithell, and was supported by Adele Rae of the Kirkstall Valley Development Trust.

In her nomination, Cllr Bithell described Cherie’s: “excellent work feeding the people of Hawksworth and beyond.

“Cherie and her team make and distribute hundreds of meals ready to be reheated each week. They have also provided food parcels for both the community and our local schools. This work has been done on a voluntary basis, often working very long hours. The Kirkstall response to Covid-19 would have been markedly harder to achieve without her help.”

Upon hearing the news of this recognition, Cherie said she was both surprised and overwhelmed, adding: “This has made my day…..no, it’s made my year!”

Ms Reeves will continue to celebrate the community spirit of the people of West Leeds by distributing Local Hero Awards throughout July and August, but nominations have now closed.