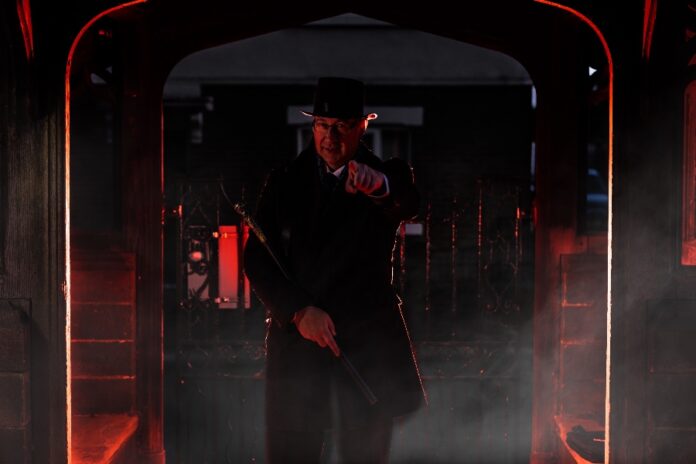 The very first MyPudsey spooky tours were the culmination of many weeks of planning, scrutinising and stressing over the small details to try and make sure we put on the best event we possibly could in the run up to Hallowe’en.

The idea was first formed back in May this year following our successful cemetery tours, following a number of meetings between the team the idea was born – it was time to spook the good folk of Pudsey.

As we have mentioned many times before, we don’t do this for our benefit, this is entirely for the benefit of the residents of our town, its businesses and its charities. For every event we choose to run, we carefully select a charity to benefit from the donations we receive.

For the spooky tours we picked out Pudsey Community Project, they are a fantastic community group within the town that have been a lifeline for many during the pandemic and beyond. All proceeds from the event are going directly to them.

Before we reveal the amount we raised, let’s take a look at some stats:

The running of these events requires a good team, for the Spooky Tours we had six people involved from the marketing through to stewarding.

Although originally planned for three nights, the MyPudsey Spooky Tours ended up running over four nights due to overwhelming demand.

The MyPudsey Spooky Tours were originally planned for three nights, with 15 people on each night. This quickly expanded to 20 a night, over 4 nights.

During the four nights, with the help of a couple of spooky friends we aimed to spook, haunt and terrify our guests – we sincerely hope we achieved our goal.

Every single story we included in the tour had an element based on fact throughout the history of our town, and in fact to verify this we had a visitor with us on the first night that is an important member of the Pudsey Civic Society who when asked by our demon tour host “Can you confirm that all these stories are based on truth” he duly nodded and verbally confirmed that fact. As if our tales weren’t spooky enough!

We hope that not only were you sufficiently spooked, but we also hope you learnt some things you had never known about the town – for example, the origins of our wonderful cenotaph or about the fantastic doctors that once walked the streets of Pudsey.

With the help of each and every one of you that attended our event over the four nights, we can now confirm the amount you helped us raise for the Pudsey Community Project. Thank you once again for your support we are super excited to reveal we have raised:

We are immensely proud of the amount raised, and we are so excited to be able to hand this sum over to Pudsey Community Project so they can put it to use right away.

Throughout the four nights of the tour, we also received some truly brilliant feedback from people that attended. Some of those quotes can be found below.

Fabulous night tonight on the Pudsey Spooky tour, learnt so much about our amazing town..tour guides were sensational, well done our kids loved it too, looking forward to more TOP, Tours Of Pudsey……

Really enjoyed it. James thought it was brilliant. On the way back to the car we had to go and look at the window by the cenotaph and the cat on the roof.

Guys – top effort. We really enjoyed it. Would defo recommend it to anyone. Look forward to any future instalments!

Really enjoyed it and so did my daughter recommended to anyone and I learned somethings I didn’t even know about Pudsey, thank you again for a fab night!