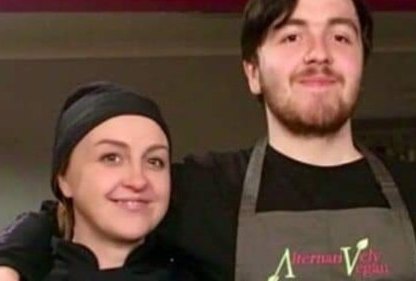 A fundraising appeal to save Alternatively Vegan, a Pudsey café which opened less than a year ago has reached its target within three days – and the cash is still coming in! writes Anne Akers.

Angi Haist left her job at Leeds City Council to open the café, in Richardshaw Lane and it soon became a popular eating place. However, an unexpected debt which she couldn’t pay meant the business was under threat.

Her son Jack started at Huddersfield University in 2015, but within two weeks he became isolated and depressed and began to self harm. Angi brought him home and he left the university.

By March 2017, Jack’s mental health deteriorated to the point that he tried to take his own life. He survived, but was left with a brain injury which affects his mobility, speech and memory. Despite that, Jack volunteers at the café.

Angi had also suffered a personal trauma over the past three years, but she and Jack continued to work hard to make the business a success.

She was shocked when in June 2019, she received a demand for the cost of the Jack’s accommodation at Huddersfield University, who had applied for a county court judgement, with costs this comes to £6,808.14.

Angi had put all her money into the business and couldn’t afford to pay. Customer and friend Shirley Humphreys launched a gofundme appeal to raise the money.

“The future of Alternatively Vegan is now very much at risk. This is a woman who routinely cooks and delivers hot meals to the street homeless in Leeds and has staged many charity events at the restaurant, all at great personal cost,” she says on the fundraising page.

“This Christmas she has committed to serving free Christmas Day lunches at the restautant for those who would otherwise be alone or vulnerable,

“Angi and her team have provided so much more for so many people in need….Alternatively Vegan has become a huge part of the local community.”

Within three days, the target was reached, and exceeded.

“This is so wonderful and it shows that despite how it may seem at times there is much kindness and love out there,” said Shirley.