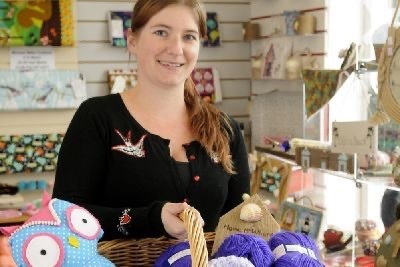 A new indie shop aiming to become a hub for the many crafting groups across West Leeds will officially open on Saturday. Community reporter Iola Shaw went along to speak to owner Jacqui Holden.

West Leeds crafters are gaining a fabulous new asset with the opening of  Topstitch at 3 Lidget Hill – just across the road from the Pudsey bus station – on Saturday 15 February.

The official opening of this haberdashery, wool and needlecraft shop has a warm welcome with the offer of coffee and cake any time between 9am and 5pm.

Jacqui Holden, 34, recently moved from Fleetwood and sadly had to give up her flourishing shop there – but it’s West Leeds’ gain.

She hopes to build on her experience of having established Knit and Natter sessions, craft workshops and everything you would expect for your sewing, knitting, crochet needs sales.

Garment alterations are on offer too, as well as opportunities to learn more whether new or experienced to all needlecrafts.

When asked why she had taken the plunge into self-employment, a heartfelt “I wanted to do what I like doing” was the response – and she clearly has the passion and experience to make it work.

She hopes to create a hub for the many crafting groups that West Leeds is blessed with as well as groups further afield – her old friends from Fleetwood are already planning a trip over the Pennines just to visit!

Starting with Monday to Friday opening 9am-3pm and Saturdays 9-5pm, there will also be a Thursday knit and natter group running from 12-2pm weekly starting on the 20 February.

The shop has plenty of space for group sessions, running workshops and hopefully an evening group will be established very soon.