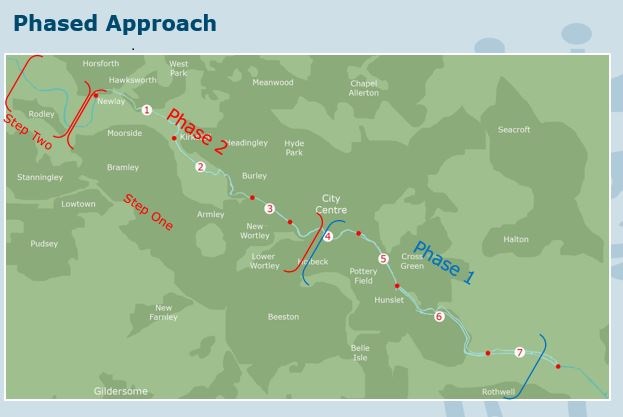 Flood defences along the Kirkstall Valley were given the go-ahead by Leeds councillors today.

Defences will be delivered in two steps

Phase two of the Leeds flood defence scheme, covering the Kirkstall Corridor, will be delivered in two steps, as Leeds City Council are taking a pragmatic approach to allow work to get under way as soon as possible.

The approval today was for the first of two steps which will, when combined, be a £112.1m investment in Phase 2 of the Leeds Flood Alleviation Scheme.

The first step starting this autumn, will use £65 million funding already secured from the Government, alongside additional financial support from Leeds City Council and partners.

What exactly was approved today?

The first step was approved. It will reduce the risk of flooding along an 8km stretch of the River Aire from Leeds city centre through the A65 Kirkstall Road corridor and will provide an initial level of protection against the threat of flooding from the River Aire which equates to a 1 in 100 (1%) chance of flooding in any given year.

This is the same standard that Phase 1 of the scheme currently provides to the city downstream of Leeds station.

Talks are continuing to secure the remainder of the funding to carry out the second step and complete the scheme in full which, pending further planning approval, would double the standard of protection offered by the whole Leeds Flood Alleviation Scheme.

Where will the defences be?

When will this happen?

Now that planning permission has been given, Leeds City Council can award the contract that will see the detailed designs for the first step of phase two drawn up this summer, followed by work starting in the autumn.

What’s all this talk about natural flood defences?

Well, the first step also incorporates a flagship Natural Flood Management programme that will be delivered across the catchment upstream of Leeds alongside engineering works within the city.

This programme, delivered by the Environment Agency on behalf of Leeds City Council, will involve working with partners and landowners to deliver a range of measures, such as the creation of new woodland, woody debris dams and wetland areas, which can slow the flow of rainwater into the river, helping to reduce the risk of flooding and mitigate the impacts of climate change.

Additional planning approvals will be sought from the relevant authorities as the catchment wide programme develops.

What’s the reaction been to today’s decision?

The politicians are certainly happy, as you’d expect.

“The planning support given today is fantastic news so that we can get on and start delivering the next phase of the Leeds Flood Alleviation Scheme to provide the protection from the threat of flooding and the reassurance our communities and businesses need and deserve.

“This two-step approach is a pragmatic way of doing what we can with the funding we have now, but we remain absolutely determined to get this scheme completed in full to offer the best possible level of protection we can for Leeds and surrounding areas.”

“This decision is great news for Kirkstall and the whole of Leeds more widely. Nearly 3 and half years after the devastating Boxing Day Floods, the council can finally start putting in place important flood measures that will protect homes and businesses.

“But this is far from the end of the story. The Government must now match the ambition shown by the council and provide the additional funding still needed to upgrade the project to a scheme which provides a 1-in-200 year level of protection. Only a 1-in-200 year scheme will protect Kirkstall from the severity of flooding experienced on Boxing Day 2015.

“The ball is now in the Government’s court. They must offer the funding in the next spending review and deliver on the commitments that ministers made to local people in the aftermath of the floods. The Leader of the Council and myself have made clear that we are keen to work constructively with the Government on this to get the job done.”

“We can now begin work on the ground at pace, within the funds we have available.

“Our ambition is still to complete both steps of this second phase of the scheme. The first step will provide much better protection from the River Aire upstream of Leeds station through the Kirkstall area and out to Newlay.

“The natural flood management measures that will be delivered across the catchment upstream as part of the first step will not only help reduce flood risk but also restore and create new habitat, increase biodiversity resilience and improve water quality. This will contribute to delivering the Government’s 25 Year Environment Plan and realising the vision of the Northern Forest in the Aire catchment.

“We are looking forward to the next stage of delivery and being able to share the detailed design of the proposed scheme with the residents, businesses and wider community of west Leeds.”

So what’s happening with step two?

Step two of the Phase 2 scheme will be the creation of a flood storage area near Calverley.

Moveable weir technology also featured in phase one of the scheme in the city centre will be used to allow water to be stored and then be released slowly back into the river in a controlled way.

The second step will reduce the risk of flooding along the 20km stretch of the River Aire from the outer ring road to the west of the city, through the city centre and out past Stourton, providing an increased level of protection against the threat of flooding from the River Aire which equates to a 1 in 200 (0.5%) chance of flooding in any given year.

When constructed, it will make the Leeds Flood Alleviation Scheme one of the largest flood defence schemes to be constructed in the country.

A funding gap of £23.3m still needs to be bridged before there is the one-in-200-year level of protection wanted by civic chiefs. Both Reeves and Blake are lobbying the Chancellor Philip Hammond to come to Leeds to see the plans and offer additional funding for the project in the next spending review, which is expected later this year.

What work is being done on step two?

Work on this step will continue and includes:

A separate planning application has also been submitted to carry out landscape works benefit the environment and wildlife, and improve access to amenities. This will include two new bridges, improvements to footpaths and new woodland and natural areas. If approved, the works will be delivered as part of the first step of phase two of the scheme.

Where do I find out more?

The impact of Storm Eva in Leeds at Christmas 2015 affected 3,355 properties in Leeds, of which 672 were commercial businesses. The direct cost to the city was an estimated £36.8million, with the cost to the wider city region being more than £500million.

The first phase of the Leeds Flood Alleviation Scheme has seen formal flood defences installed along the River Aire for the first time.

The £50million project began with works completed downstream in Woodlesford which proved effective during the Christmas 2015 flooding, before moving into the city centre with measures featuring the introduction of state-of-the-art mechanical weirs to control river levels.