Farsley Celtic put in another classy performance as they progressed to the playoff final after a 4-0 victory against Colne, writes Thomas Ritchie.

Goals from Aiden Savory, James Walshaw, Adam Clayton and Lewis Nightingale saw The Celts on their way on a cold April evening at Throstle Nest.

Colne were difficult to break down at first with strong vocal support, however Farsley had the better of the early play. James Walshaw, with his first appearance at Throstle Nest since February 25th, had the first opportunity as his shot was blocked wide after being played in by Paul Walker.

Just before the half-hour mark Farsley took the lead as Colne goalkeeper Gregory Hartley flapped at a Lewis Nightingale corner, with the ball falling to Aiden Savory who tapped home.

On the stroke of half-time Farsley extended their advantage further. Lewis Nightingale’s corner travelled all the way through to Walshaw at the back post who nodded the ball onto Adam Clayton who headed home past Hartley.

Colne had their first clear-cut opportunity on the hour mark as Jason Hart volleyed over, before Farsley got back on the front and won a penalty when Lewis Nightingale was felled in the box. Richard Marshall took the spot kick and saw his effort pushed away to safety by Gregory Hartley.

Farsley goalkeeper Graeme McKibbin was forced into his first and only save of the night as Jason Hart raced through on goal before seeing his strike well saved.

Farsley then added the icing to the cake with a fourth goal as Jordan Deacey sent Lewis Nightingale racing towards goal and he capped a superb performance as he fired into the back of the net.

Substitute Chris Atkinson could have added a fifth in added time as Lewis Nightingale squared the ball instead of shooting, with Hartley making a fine save.

However Farsley had already done enough to secure a spot in the playoff final, in which they will play host to Ossett Town on Saturday. 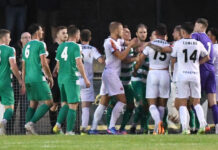