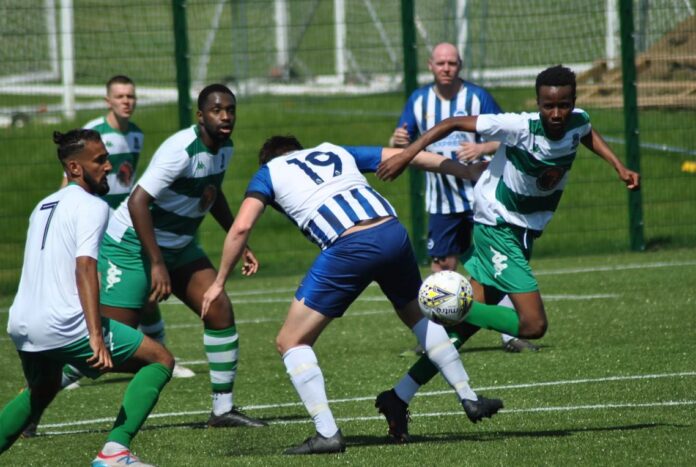 Farsley Celtic Deaf will compete in their first ever England Deaf Football Cup Final this weekend when they take on St Johns DFC at Oxford City’s Marsh Lane ground on Sunday.

The side made it through with a comprehensive 6-0 win over Brighton & Hove Albion DFC in the semi-final, just under a fortnight ago.

Like all sides their season has been heavily disrupted due to the pandemic, but the side are close to completing the season, which has seen them play in many competitions. Paul Young, Head of Deaf Football at the Celts looks back at the season so far and also ahead to Sunday’s historic fixture:

”We started the current season as normal last September, and it was suspended from November last year to April this year. We play in EDF North League which includes Blackburn DFC, Darwen DFC, Washington DFC, Derby DFC, Bradford DFC, and Birmingham DFC. Due to the late season resumption, time availability, and clubs withdrawing from this campaign, we had to play against opposition only once, and ended up playing a total of four games this season.

“We also play in WRCFA’s Flexi League on Thursday’s night, against local hearing clubs and the league is of great beneficial to us due to its high competitiveness nature as well as being an competition to develop our skills and match play.

“Our run of the EDF Cup started in the first round, against St Albans DFC, in North London and we won comfortably, 5-1. Originally the match was scheduled last year but, due to lockdown rules, it was moved to end of April this year. Then our quarter-final match came in the middle of May, against Welling United DFC, at home, and it was a hard fought 2-1 victory. Rugby was the location for our semi-final match against Brighton and Hove Albion DFC where we won 6-0.

“Our opposition in the final is St John’s DFC. They are our biggest test so far and they are ranked one of the best Deaf football clubs in Europe. They are no stranger to Cup Finals. Having said all that, FCDFC is a relatively new team and a fast growing one, and we have ambitions to be one of the best clubs in UK. I expect the final to be a water-mouthing match with both teams really going for it.

“(In preparation for the final) We postponed our Flexi League midweek match with permission from both WRCFA and opposition and they wished us the best of luck for the final. We continue with our weekly training for preparation, both our Team Manager, Kris Burns, and Assistant Manager, John Morrissey-Bell, work on tactics and look ahead to the future.

“Following the conclusion of this season, we expect the EDF League to start in September. Our aspiration is always to move forward and develop. We are constantly looking for new good standard players, whatever their level of deafness or communication methods. This season we have new players from outside the Farsley and Leeds areas, and they have really helped us in team development and competitiveness. All of our players communicate differently – signing, speech or both – but we really gel on the pitch and support each other.

“The future is to continue to be the best Deaf football club in Yorkshire and become one of the best in UK. We have players who represent the England Deaf Senior team and others underwent recent England Deaf U21s trials. This only increases the profile of the club and develop players to international level. We fully appreciate the backing of Farsley Celtic FC’s board, especially Joshua Greaves, for their support and shared resources, and, not least, our sponsors, Rooster’s Brewing Co and Deaf Identity. Without them, we would have struggled. We have had comments from players’ families and fans saying the club is a community one and they enjoy their experience with the club.”

Bramley Buffaloes ‘A’ fall agonisingly short in a 14-try thriller