An eyesore building at the centre of a planning standoff between developers and council planners is no closer to having its future resolved, we can reveal.

As reported back in May, the derelict Farnley Sports and Social Club has been targeted by arsonists and vandals as the owners of the site negotiate with Leeds City Council to build houses there. 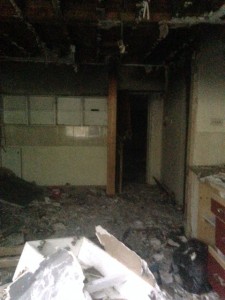 But a disagreement between site owners Farnley Sports And Social Club Ltd and planners over the number of houses to be built on the site is delaying the demolition of the former club, which closed last December.

The owners say that for financial and planning reasons they won’t demolish the building until they get planning permission for their new development.

But the council says the volume and overall footprint of  previous proposals have been unsuitable for already developed land in the greenbelt. 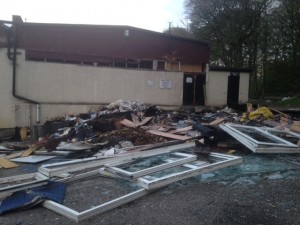 There was a further blaze on the Butt Lane site last week, sparking renewed concern about the safety of the site by local residents.

“Something will have to be done. If it’s a death trap, it can’t be left like that. The owner is responsible for the safety of others in a residential area, but then again some kids should not be stupid enough to enter the building. I suppose we’re talking kids, or druggies looking for shelter to do their stuff.” 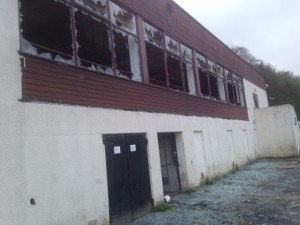 Another said kids were often seen on the roof. And another added:

“There’s more to this than just planning permission – safety, environment, devaluation and also the waste of the police and firefighters’ time and money. Surely something can be done as it’s a waste of resources and public money. [It’s] also putting other people’s lives at risk, including the firefighters while they tackle the fires at the club.”

Rubbish, glass and debris from the building still litters the site, which is the former home of the Farnley Falcons rugby club. Some rubbish from the site has also found its way up to the adjoining Farnley Fish Pond. The site’s also been used for dumping rubbish and local residents are fearful of more anti-social behaviour at the site as the school summer holidays start.

In light of the standoff, West Leeds Dispatch can reveal that new proposals have recently been submitted for the site which Farnley Sports and Social Club Ltd hope will be successful.

Applicant Bernard Conlon, a director at Homes 4 U (Leeds) Ltd, told the Dispatch a draft of their new proposals – believed to be for eight houses, slightly reduced from previous applications – was sent through to planners on Monday, July 13. He said:

“Leeds council planning and the Green Party – who we met with – were not happy with the plans we had put forward and, as a result, nothing has moved [since May].

“The Green Party will never be happy with any development at the site I am afraid, but we are hopeful that our latest proposal will satisfy planning. It was drafted by JMA Consulting and has followed all the guidelines that we were given by  the  council. We can only wait for their deliberations.” 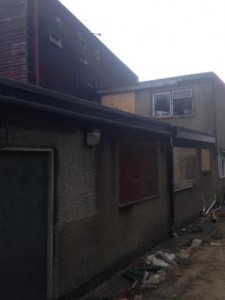 But Cllr David Blackburn (Green, Farnley and Wortley ward) said the continued problems with the building were unacceptable and called for a speedy resolution to the situation. He said:

“Clearly it would have been helpful if the application to demolish the current building and the planning application for developing the site had been made separately.

“This would have allowed for the demolition of the old club while discussions were held between planners and the applicant.  I can understand why this was not the case, but it would have been in the interests of the local community if it had been done that way round.

“The original issue was that the planners were not satisfied with the initial application.  Some time ago, ward members, planning officers and representatives of the developers met and as a result of that I insisted that the architect and the planners go away and try to resolve their difficulties.

“Unfortunately, the resultant conversations between those two parties did not resolve the planning issues.

“I am therefore very happy to learn that a revised application has been submitted and I hope that it will satisfy the planning issues identified by officers.  In my view, the continued problems we are having with this building are totally unacceptable and a resolution of this needs to be found rapidly.”

As reported back in May, Farnley Sports And Social Club Ltd say they can’t press ahead with plans to demolish the building as they might lose the ‘principle of development’ on green belt land if the club was demolished first. A spokesman from the council said they hadn’t ‘addressed concerns regarding new build on green belt land’.

Council planning officers will now look at the latest proposals ahead of the application going before councillors to decide its fate at a south and west plans panel meeting at Leeds Civic Hall.