Farnley Falcons bounce back from arson attack with fun day

A fundraiser is set to raise substantial sums of money to help replace a Farnley rugby club’s changing rooms which were devastated in an arson attack almost two years ago.

Farnley Falcons were left without permanent facilities after the empty Farnley Sports and Social Club, on Butt Lane, was destroyed by fire in August 2015. The building had originally closed in December 2014.

The Falcons have since rebuilt their changing rooms near their Butt Lane pitches – and launched a £25,000 changing rooms appeal last October. Volunteers have organised a family fun day to help raise the final £1,000. 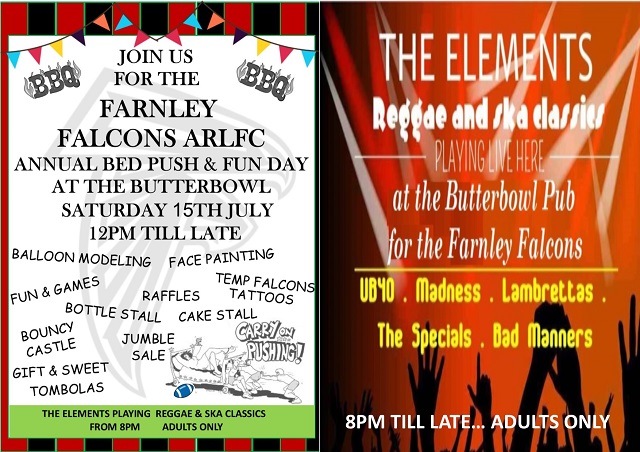 The event, on Saturday July 15, at The Butterbowl, runs from 12pm until late and features a wide range of fun activities for kids and a band in the evening.

Donna Hindle, part of the Farnley Falcons fundraising team and organiser of the fun day, said:

“We’ve rebuilt our new changing rooms, but it has taken time with in-house fundraising and parent and community volunteers to enable us to return to our Butt Lane pitches.

“Despite the arson attack and against all odds we are now one of the fastest growing teams in west Yorkshire, and were having a fantastic 2017 season on the pitch. In three years we have launched nine junior teams from minis to u12s, a successful open-age outfit alongside our 12-14s girls team.”

Ms Hindle said the Falcons were also launching a masters team for men over the age of 35. She added:

“We now play from the Butterbowl Pub in Farnley, who have been amazingly welcoming and provide all our players and away teams with after-match food, and as much as we train at our pitches we had to strike up a temporary deal with a local team to play on a pitch close by and use their changing rooms.

“The changing rooms are close to completion but we need a further £1,000 to spend on finalising the showers/toilets and  kitchen to enable us to return home and play with pride and move forward at our own pitches.”

The club is also appealing to local businesses who may be interested in selling or advertising their services on the day in return for a donation towards the tombola and raffle.

Read more about the Farnley Falcons on West Leeds Dispatch.