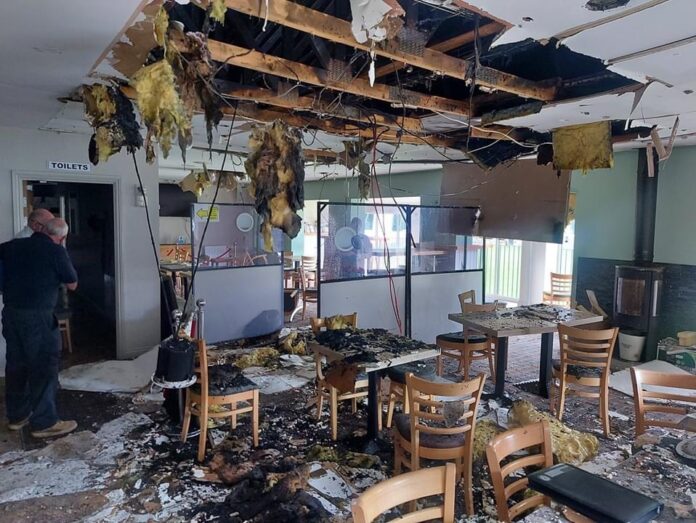 A fundraiser to support New Farnley Cricket Club has netted more than £6,000 in donations – just 24 hours after the clubhouse was gutted due to an arson attack.

As reported by WLD yesterday, police and fire fighters were called to the cricket club at 11.10pm on Bank Holiday Monday and are investigating the incident, which is being treated as arson.

It’s estimated the damage could cost £100,000 to repair, but the community has rallied, setting up a crowdfunding appeal yesterday with the aim of raising £5,000.

“We’ve smashed our first target of £5,000 so we’ve upped the target to £10,000. We are overwhelmed with the amount of well wishes and offers of support from people far and wide and I know the chairman’s resolve to bounce back is stronger than ever!

“Keep supporting, it will all help to get the club back on its feet As Soon As Possible.

“The club is used not just as a cricket club but a social club, restaurant, cafe and much more. We are hoping to raise as much money as possible to aid in the repair and refurbishment of the club so it can re-open quickly and continue to be used by the whole community.

“Any donations are welcome and will be used towards the repair and reopening of our much loved space.”

New Farnley Cricket club chairman John Baldwin has thanked neighbours and West Yorkshire Fire Service for their swift actions on Monday night and for the generous response of the local and cricketing community to the club’s appeal. He added:

“The committee and I have been overwhelmed by the response we have received since the news broke.

“I would like to thank every single individual, sports club and business, both locally and from afar, who have reached out, offering help and support… we are grateful to have such strong community spirit.”

Both the police and club are appealing for witnesses to the arson attack, with the club producing this poster:

A spokesman for West Yorkshire Police said: “Officers are investigating the incident which is being treated as arson and any witnesses are asked to call police on 101 quoting crime reference 13200439115.”