Video: Farnley butcher puts business up for sale after 30 years 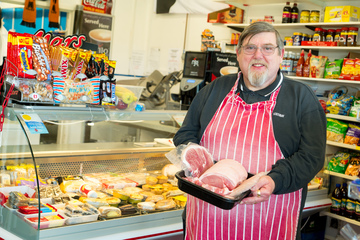 A family-run butchers shop in Farnley is up for sale as its owners head for retirement after 30 years.

Terry’s Star Butchers, on Whincover Drive, is currently on the market with business broker Hilton Smythe for £42,500.

Terry Riley, who has owned the shop with his wife Paula since 1988, has been in the meat business since he left school.

Originally from Wolverhampton, Terry made his home in Leeds after getting a management job in a local factory. He started the shop as a side-line, but its popularity led him to running it full-time.

Over the past 30 years, Terry and Paula’s five children have taken turns to help out running the shop. but now they have flown the nest the Rileys have decided they would like to move on to their next adventure, spending time with their nine grandchildren.

“I’ve always worked in retail, particularly meat, and I’ve absolutely loved running the shop, but the time has definitely come for me to hang up my apron.

“We’re a real hub of the community. We’ve expanded into being a convenience store, selling tinned goods, frozen foods and fresh snacks, as well as meat, and this makes us very popular, especially with the school kids at lunch time.

“Terry’s Star Butcher’s has been a very important part of mine and Paula’s lives, but we’re now ready to put our feet up and enjoy our family.”

Current turnover at the shop is approximately £104,000 per year.