A new theatre group is aiming to bring the community together and make Armley the performing arts capital of Leeds.

Armley People’s Theatre (APT) is appealing for people with an interest in drama, singing, theatre production, creative writing, set design, prop sourcing and making, or costuming to get involved. 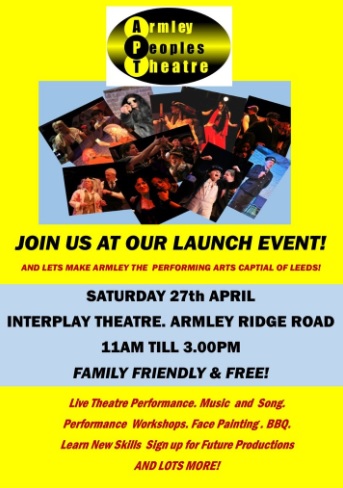 “We welcome anyone aged 10 and over who wants to join in and either share their talents or learn new skills from others. All of this creative energy will go into putting on public performances throughout the year.”

Sarah said a group of people from New Wortley Community Centre arts projects got together last year and put on a performance of Oliver at Interplay theatre. She added:

“There was such good feedback from both the people taking part and the audience that we decided to build on that momentum and do bigger things.

“Unfortunately the arts and music programs at the community centre have just been cut. Tim Dawtry, who was project manager for the arts programmes, and myself decided to set up a separate group and involve more of the Armley community.

“We want to create a grassroots creative arts hub in the heart of the community and the people at Interplay theatre have agreed to be our new base. We will hold creative writing, costume making, theatre production, drama and music workshops available to anyone aged 10 and over for free. These workshops will then build towards public performances throughout the year.”