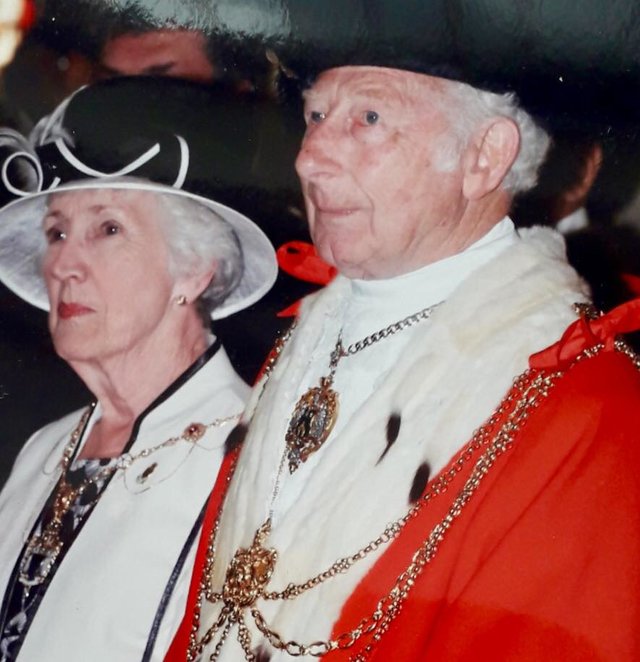 Tributes have been paid to former Lord Mayor of Leeds and Calverley and Farsley councillor Frank Robinson who died in Bradford Royal Infirmary at the end of May. He was 94, writes Anne Akers.

Frank was an active member of Calverley Rotary Club and founder, along with fellow councillor Andrew Carter, of Calverley in Bloom.

In a tribute on the Rotary Club’s Facebook page, Frank was described as a great all round sportsman who excelled at both cricket and rugby union, captaining his old school, Old Crossleyans, near Halifax, in both sports.

He was an avid squash player, skier and loved walking in the dales.
His hobbies included gardening and going on family holidays in in his campervan.

During the second world war, Frank was a Bevin Boy, one of a number of conscripts sent to work in the mines rather than being sent to fight. After the war, he trained and worked as a PE teacher.

“Frank Robinson was a dear friend and a great ward colleague for 12 years.

“Frank remained active in Britain in Bloom, the Rotary Club in Calverley and local politics up to only a few months ago. He will be greatly missed, he was an absolute gentleman.”

A widower, Frank had two children, grandchildren and a great grandchild. The private family funeral will take place on Thursday June 12, the cortege will drive through Calverley for people to pay their respects. A celebration of his life will be held when lockdown restrictions are lifted.

Facebook
Twitter
Pinterest
WhatsApp
Previous articleWest Leeds: Little Free Libraries light up one year on from founder’s passing
Next articleGetting by with a little help from our friends in Armley– 25 years on