Work on the controversial £29 million cycle superhighway – which runs through West Leeds – has been scrutinised at a public meeting.

More than 30 local residents and business owners attended a recent Bramley and Stanningley Forum meeting and raised a number of issues on the impact the work is having on people’s homes and businesses.

Problems ranged from a lack of communication with business owners to residents concerned about disruption outside their homes.

One Stanningley business owner said he had not been notified about the scheme until a third meeting held between local businesses and project managers.

“Communication has been really poor and it’s not getting any better. I still don’t really know what’s going on – this is people’s livelihoods you’re dealing with.”

Bramley and Stanningley ward councillor Caroline Gruen said there had been other complaints about communication and also raised issues surrounding Stanningley Bottom. She said:

“There is a lot of concern about how the cycle superhighway will work, given the lack of width in the road. I know buses have been affected and residents are concerned about the impact on their homes.”

Another resident – a supporter of the project – said he was ‘deeply concerned’ about the quality of the finished lane after claiming there was ‘cost-cutting’ on the scheme, which he feared could lead to substandard drains and issues with surface water.

Also raised were possible conflicts between cyclists and people queuing for buses and the need for more pedestrian crossings on the lane, which has met with a mixed response in Stanningley and scepticism at an Armley public meeting. 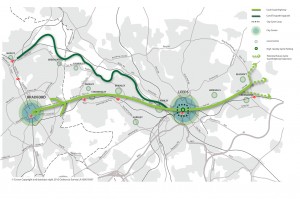 Communications and engagement project manager Ginny Leonard and scheme designer Paul Brufell – members of the City Connect team which is building the lane – were on hand to field people’s questions.

Ms Leonard said the aim of the lane, which is now half completed, was to help improve air quality by getting people out of cars and tackling inactivity by encouraging people to take up cycling and get healthier. The scheme has been funded out of  a national pot of money by the Department for Transport – “If we hadn’t got it, somebody else would have done,” she said.

“I appreciate there are disruptions. We are working with residents and business owners to keep them at a minimum but they are unavoidable with this level of scheme. If there are any ways you think we can do better, let us know and we will try and sort.”

On the issue with the width of road at Stanningley Bottom, Mr Brufell said they realised ‘at the very beginning’ that the road was not wide enough to accommodate the scheme. He added:

“What we have there is a 20 miles per hour zone, not a cycle superhighway.  The work we’re doing there at the moment is a public realm enhancement scheme.”

Regarding issues with drainage, Ms Leonard said the scheme was not finished yet but said she would speak to contractors about any issues.

Answering a query about publicity and sustainability, she added there would be a raft of measures ‘to keep up people’s enthusiasm’ or the lane, including long-term loan schemes to encourage people to buy bikes and working with local groups and organisations. She made notes of all issues raised and promised to respond to them.