Community litter picks in Pudsey and Farsley – will YOU sign the Pudsey litter pledge?

Residents in Pudsey and Farsley will be taking a pride in their communities with litter picks tomorrow (Thursday, 6 Aug).

Pudsey Litter Action is a group of people who are prepared to take action to reduce the amount of litter blighting Pudsey, Farsley and Stanningley – and they’ve organised a community clean up which they hope as many people as possible will support.

Residents keen to tackle litter are invited to meet outside M&S at the Owlcotes Centre at 7pm on Thursday, by the red post box. One of the organisers, resident Edward Russell, says litter pickers will be out in force at tunnel between Owlcotes and Primrose Hill and possibly by New Pudsey Station.

Resident Susan Wilkinson will be one of the poeple attending. She said:

The group is also asking Pudsey residents to take a simple pledge over on their Facebook group:

“I pledge to drop no litter, no matter how small, and to pick up one item each day.”

Meanwhile, a council-run action day in Farsley will also run tomorrow, with skips placed at various locations between 9am and 5pm. Housing officers will be making home visits, and local police and the youth service will also be in attendance.

“It’s a great idea and a chance for everyone to join forces as a community and tidy up any rubbish and litter. This should happen more often .“

Full details of the Farsley event below: 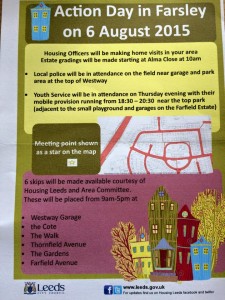