Comment: Time to make some noise over Kirkstall Forge Station

It’s been a little over a year since the first train pulled into the new £16 million Kirkstall Forge Station, writes Dispatch editor John Baron.

The station, part of a wider Kirkstall Forge development including 1,000 new homes, as well as office, retail and leisure facilities, has proven to be a big success.

As we reported earlier this year, passengers made 21,400 journeys between the new Kirkstall Forge rail station and Leeds in the first five months alone, far exceeding the figure of 20,200 per year forecast ahead of the station’s construction.

But so far Arriva Rail North have failed to listen to calls for to add extra trains to meet increasing demand, provide a more frequent service and ease the pressure on congested roads in the area.

The Dispatch wrote an editorial in March saying that it was time for Kirkstall Forge Station to fulfil its potential.

We carried out a poll at the time in which over 97% of respondents said they wanted more services calling at the station: 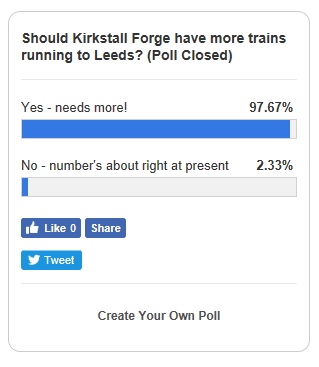 What’s happened since then? Deafening silence, that’s what.

The station – on the Leeds to Bradford line – is a joint project between the West Yorkshire Combined Authority, Leeds City Council, Network Rail, Northern and the Commercial Estates Group.

The Dispatch contacted West Yorkshire Combined Authority and Northern for fresh comment two weeks ago. Despite repeated attempts neither of them bothered to respond to our press inquiry.

Perhaps The Dispatch is too low down on the local media chain for them to bother to respond, with our 330,000 users generating more then 1.4 million page views since August 2015. Or perhaps they just have no answer. Perhaps they hope we’ll just go away and stop asking questions.

Either way, their silence and failure to make a public statement is telling. And we’re not going to go away.

The concerns of the general public shouldn’t be ignored or swept under the carpet.

If you want more trains stopping at the station, it’s time for you to write to The West Yorkshire Combined Authority, which is a collaboration between West Yorkshire local authorities. It is the place where work that cuts across the whole of West Yorkshire and city region is undertaken. You can e-mail a complaint to them here.

They promise a reply within 15 days. Let us know what they say!

You can also complain about the lack of services to Northern, who run trains to and from Kirkstall Forge. Their complaints page says ‘customers are at the heart of all we do’. So put it to the test and see what their response is. Follow this link.