Mark’s History: Castelarmley, a ‘Giant’s Hill’ and The Greystone off the River Aire

On the south bank of the River Aire near where Viaduct Road now crosses lays Giant’s Hill, writes Mark Stevenson.

The old ordnance survey maps mark this area as a supposed site of a Danish Camp (Vikings). 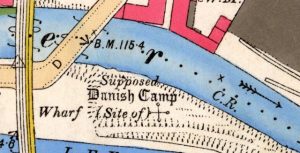 There was once a large earthworks here split into two parts, 100 metres round and 150 metres in length. Historians now think is was a Motte and Bailey castle built by the Normans.

There is a document from 1300 which refers to a place called Castelarmley, which suggests there was a castle there at the time. What remains there were at Giants Hill have long since been destroyed with the building of the canal.

The name Giant’s Hill comes from a local tradition that the earthwork was inadvertently made by a giant who was throwing a rock across the river.

To balance his weight, he stepped backwards and put his foot down heavily in the mud and earth.

The footprint which he left behind was known from that time as the Giant’s Hill and the stone he threw landed in Burley on the opposite side of the river, where it was known as the Greystone.