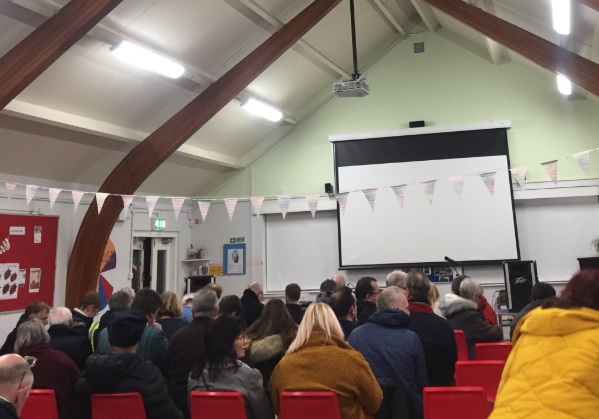 Leeds West voters have put their questions to the candidates hoping to represent them in the upcoming general election, writes Lottie Kilraine.

The hustings, held at Bramley Community Centre, lasted around two hours and covered a range of topics from Brexit to local issues such as future of the TV Harrison sports ground in Wortley.

There was a big turnout from a vocal crowd of residents who weren’t afraid to show their support, or lack of, for the different candidates.

Alastair Hutchinson, who hosted the event, described the night as critical to the community, saying:

“Politics needs to be accessible for all to understand and I hope this has helped.”

All the candidates agreed that more needs to be done for community centres including youth and sports projects, with Conservative candidate Mark Dormer saying “The youth are the future.”

Labour’s Rachel Reeves vowed to continue her work to reinstate the TV Harrison sports ground and Ian Cowling, representing The Yorkshire Party, said “[the grounds] are a fantastic facility and I think it is disgusting that it is being taken away.”

Health was widely discussed throughout the night with Mike Davies, standing for the Alliance for Green Socialism Party, expressing concern about the privatisation of the NHS.

The Green Party candidate, Victoria Smith, said her party is “fundamentally against the privatisation of the NHS” and accused the Conservatives of lying.

Both Labour and the Liberal Democrat representatives claimed more needs to be done to improve treatment for mental health.

Regarding Brexit, it was clear that the Conservative candidate would be backing the PM to ‘get Brexit done’ while the Liberal Democrat candidate, Dan Walker, said he will do everything in his power to stop it from happening.

Labour and Green representatives both called for another referendum and Mike Davies, of the Alliane for Green Socialism, said:

All parties were in agreement that climate change is an important issue.

Rachel Reeves said there shouldn’t be a trade-off between economic growth and the climate emergency.

She praised Labour’s plans for their green industrial revolution as being “The most exciting part of their manifesto.”

One of the biggest controversies of the night came from Mark Dormer after he mistakenly claimed that the Conservative’s plan to raise the national living wage to £10.50 per hour was a 50% increase of the current minimum wage.

Many of the audience members spoke up and disputed this to which he apologised and acknowledged his error.

The Brexit Party candidate, Philip Mars, was unable to attend due to a family medical emergency but a statement was read out on his behalf. He said: “My vision for the people of Leeds West is for them to be heard, heeded and respected.”

Leeds West voters will take to the polls on Thursday, 12 December to decide their next member of parliament.