Travellers at Bramley Station could be left with a 46-minute gap between services on Sundays.

Provisional timetables expected to take effect from May 2018 suggest a sizeable gap between the two westbound trains an hour from Bramley Station.

Leeds West MP Rachel Reeves has written to regional director of Northern Rail, Paul Barnfield, asking him to reconsider the move. She said:

“Northern Rail plan to leave a 46-minute gap between some services at Bramley Station on Sundays and I don’t think that’s good enough.”

In a letter, Ms Reeves is asking for an extra train to stop at Bramley Station. 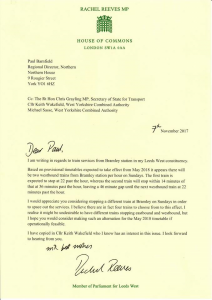 The largest Sunday gap is currently a little over half an hour.

“Bramley Station has a shocking service as is, been using it for the commute for the last six years and in that time I’ve seen two reductions in week day service, annual ticket increases beyond the rate of inflation and the most unreliable service next to Southern in the country.”