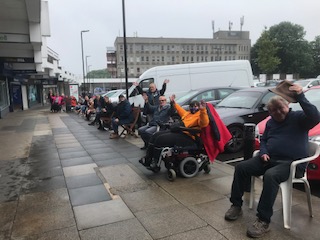 About 20 people braved the heavy rain to bring their chairs and sit for an hour to show their support for bringing benches back to Bramley Shopping Centre.

The friendly flashmob congregated on Saturday morning to make their points heard after all the benches were removed from the centre by new owners LCP last month.

The removal of the seats has sparked concerns over accessibility at the centre, particularly for older people.

“The socially distanced event is taking place every Saturday 10-11am, and anyone is welcome to join in with this friendly community action.

“Bring a chair and a spare if you can, or just bring yourself and we’ll find you a seat.”

The participants have asked the shopping centre staff to come and join them next week for a cuppa, to listen to people’s views and hear why having public benches is so important for local people’s health and wellbeing.

There will be a petition to sign and copies to take away to collect signatures.

“I went up the other morning and queued with about 20 other people, mostly elderly folk, outside the Post Office which again didn’t open its doors til after 9.20am. Those folk need seats there badly, some were holding on to walls, waiting to access the services.”

Flashmob organisers are asking people to respect social distancing of two metres, mask-up, and sit where the benches were in order to avoid causing an obstruction.

Earlier this week, a spokesman for LCP, the national commercial property and investment company that manages Bramley Shopping Centre on behalf of the landlord Sheet Anchor, said consultation with local councillors and centre tenants regarding seating and other improvements is ongoing.

They said the seats had been removed due to congestion on the centre footpaths.