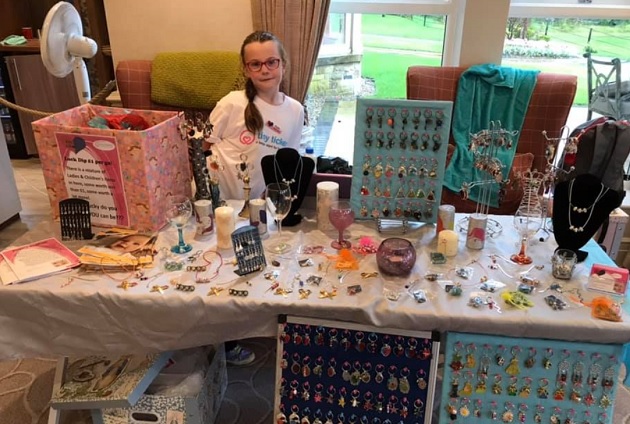 Faith is eight years old and attends Bramley St Peter’s school. She started to make bookmarks and keyrings in January to sell to raise money for Tiny Tickers, a charity for children with Congenital Heart Disease (CHD) as her best friend Oliver suffers from this condition.

She set up a Facebook Group in February to start to sell her crafts and raise awareness of CHD.

“I wanted to help babies and children like Oliver as I don’t like the idea of them being ill.  It’s important to help other people.”

Fiona Green, Faith’s mum has been carrying out research into CHD.  She said:

“Over 1,000 babies go home from hospital in the UK with an undiagnosed heart condition.  It’s one of the biggest child killers as often the condition is undiagnosed.

“Tiny Tickers was the only charity who wanted to work with us to raise awareness of CHD as well as raise money to support their work.  T

“hey provide information, leaflets, t-shirts and balloons for Faith to display on her stalls at Christmas and Summer Fairs to help them to help the charity and raise awareness.”

Tiny Tickers is a charitable organisation that aims to improve the early detection, diagnosis and care of babies with CHD through a combination of improving standards, providing specialised training and increasing education and information.

They train sonographers to detect CHD at the 20-week scan to help reduce the number of new-borns going home with undiagnosed conditions. They also support families while babies are undergoing surgery. You can find out more about the charity here/

Oliver has had four open heart surgeries and is currently on the transplant list.  His mum likes the fact that awareness of CHD is getting out there through the work Fiona and Faith are doing.

Faith has a heart of gold and is always thinking of others and how she can help them.

Both Faith’s mum and dad support her as much as they can to do her craft making and fund raising efforts while remembering that Faith is a young girl and can only do so much as she has health conditions herself.

Faith raised £115 over the summer to pass to Tiny Tickers and has recently raised £200 through selling her crafts at Christmas Fairs and running a Christmas raffle with prizes donated by local businesses and people.

Faith runs a monthly raffle to raise money for Tiny Tickers and sells her crafts through her Facebook page.

Faith and Fiona will be fundraising for some equipment in the New Year including a banner, a trolley to transport her goods from the car to the venues and a new tablecloth to help with their fundraising.

They recently had a stall at the Bramley Christmas Lights switch on and one of the radio mascots kindly gave them a gazebo which they can use both for Winter and Summer Fairs.

If anyone can or knows of anyone who can help with any of the items, please contact Faith via the Faith’s Crafts Facebook group.

“Thank you from both myself and Faith.  Without all of you we wouldn’t be able to help Tiny Tickers like we do.”