Decision reached on future of Bramley’s Globe Pub – latest on The Crown, Pudsey

The Globe pub in Bramley WILL become an undertakers after planning permission was granted by the council.

The former pub was sold recently and a planning application was submitted for a change of use to ground floor to funeral services and retail use with access ramps to front/side and privacy screen to rear. A florist would also operate from the building.

Although the fabric of the building will remain the same, the first floor will become two flats and there will be a new parking area.

The council’s planning department has said that the proposals, submitted by Full Circle Funerals, were ‘acceptable’.

“It’s not what we were expecting for the site and it’s a shame to lose an historic pub. Myself and my colleagues Councillors Gruen and Heslewood will discuss with the planners to ensure a sympathetic development in keeping with the area.”

Bramley residents recently reacted with sadness to the plans for the building, at the junction of Broad Lane and Upper Town Street.

A Dispatch poll in March found most people were in favour of retaining it as a pub: 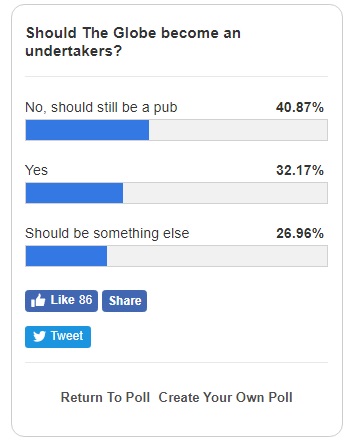 Plans to transform a Grade II Listed former Pudsey pub into flats have moved a step closer to reality – a year after proposals were approved.

As reported in 2016, JCT Properties want to transform The Crown Inn in Lowtown, which dates back to 1833, into four one and two bedroom apartments.  There are also plans to build three townhouses with parking at the back.

The plans were approved by the council in May 2017, subject to a number of conditions the developer needed to meet.

Most of the conditions, including the use of building materials, have been met in the last month, with the exception of one surrounding remediation works during the development, with the applicant notifying the council if unexpected contamination is found.

The discharge of the conditions means work can now start on site.

The stone-built Crown Inn closed in November 2014 and has been ‘under offer’ since the start of 2015.

No formal planning application has been submitted, but it’s understood the building could be turned into flats.