Bramley Buffaloes back on the paddock at a sunny Warrels 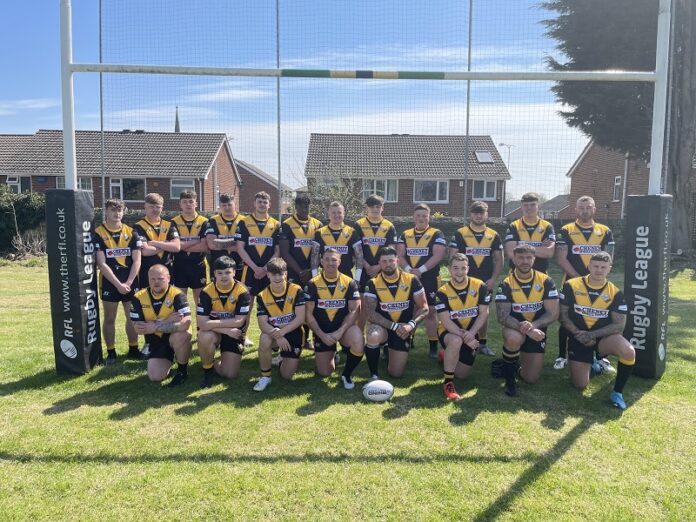 The Buffaloes returned home for their first game since 2019 and had two teams on show.

The newly formed A team was led on the field by Bramley favourite Craig Boot with many of Craig’s successful junior side wearing the amber and black for the first time. This was followed by the Bramley YML division 1 side with many familiar faces from the past.

The first match up featured a very young Buffaloes team who were up against a far more experienced side in Birstall Victoria side, with a fair number of players from Morley RU.

Unlike most, pre-match banter everyone was talking not about the teams but about meeting the strict Government protocols required to get the matches under way.

The game started with Bramley’s kick off and both sides, somewhat ring-rusty from their enforced break, traded several lost balls. With 5mins gone the Buffaloes spilled the ball close to their try line which was eagerly snatched up by the visitors who went over for their first converted try: Buffaloes 0:6 Birstall.

The young Buffaloes side looked a little nervous, but ably led by Craig with some spirited tackling and strong runs by prop Courage they levelled the score with ‘Mr Boot’ himself rolling back the years as he strode over near the posts for a converted try on 15 mins. Buffaloes level 6:6.

This spurred on the Birstall side who carved out two unconverted tries of their own whilst the Buffaloes were reduced to 12 men as Connor McGill (playing for the A team) showed a little too much aggression and was sent to the sin bin.

Although the Buffaloes went in 6:14 down at half time this was a good first half performance.

In the second half the Birstall side looked to use their kicking experience and gained territory straight from the kick off when the ball went dead. This lead to Birstall scoring a converted try in the 41st min. Buffaloes 6:20.

The following 39 minutes saw the youthful Buffaloes side gain in confidence with some excellent forceful tackling and the Birstall side were restricted to just two more tries.

Although a young Buffaloes side tasted defeat in their first game they showed great promise and ability and the coaches agreed it was a great effort with much more to come during the 2021 season.

Once every surface had been scrubbed clean and the players had their temperatures taken (including head coach Steve Langton) the main event kicked off.

The Buffaloes looked very keen in their first game back scoring an early try after strong run down the right by Kieran Hudson which ended with the ball coming into the hands of Aiden Baranyi, to dot down: 4 mins Buffaloes 4 – 0 New Earswick.

On 7 mins the score was level when their rangy second rower Will Homes showed good footwork to cut inside to score a converted try: Buffaloes 4 – New Earswick 6.

The Buffaloes hit the front again when a returning Tom White scored after bursting through the cover tacklers from 30 metres out: 10 mins Buffaloes 8 – New Earswick 6.

On 14 mins Will Homes went over for his and the visitors’ second try when he sidestepped the Buffaloes defence to score a converted try: 14 Mins Buffaloes 8 – New Earswick 12.

The Buffaloes made some positional changes, partly tactical and partly due to injuries before Kieran Hudson, showing great strength and determination, stormed over for his first try of the day: 21 mins Buffaloes 12 – New Earswick 12.

Despite some further strong running there were no further scores in the first half, although the Buffaloes had what look like a good try ruled out on 40 mins for reasons known only to the referee. Half-time score: Buffaloes 12 – New Earswick 12.

The second half was completely dominated by the Buffaloes, with some strong tackling and running. New Earswick tired and a fit Bramley side turned screw with points coming at regular intervals.

Winger Pedro finished a fine cross field move to score a converted try on 50 mins: Buffaloes 18 – 12. This was followed by an amazing break of 40-plus metres by Aiden Baryani, who left several attempted tacklers in his wake before a second try for Kieran Hudson that was converted.

In the lead up to the try Kieran was riled by the visitors who attempted to steal the ball in a triple tackle: 60 mins Buffaloes 24-12. The final try was scored following some good inter-passing by Xavier Martin who cut inside from a well weighted pass to score a converted try in the 70 min.

A telling comment was made after the game by today’s referee (well known in these parts) that Bramley showed a marked improvement by giving away far fewer penalties than the previous game when he took charge – let’s keep it up lads!