A West Leeds theatre company and charity is in the middle of its first UK tour of a powerful new play written by Armley writer Francesca Joy.

Imagine If Theatre Company, which is based in Armley Road, aims to instigate change within communities through art. 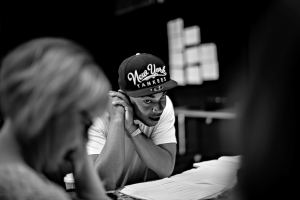 The company is currently touring with ‘You Forgot the Mince’, a moving exploration of love, loss, cause and effect. Through verbatim and physical theatre the play follows the lives of Rosa, Lily and Niko.

Inspired by real life events and set in Leeds, it tells the gritty story of a modern-day abusive relationship.

It is the debut play by Francesca Joy, who spend two years researching and developing it.

Her research included interviews with victims of domestic abuse and she attended focus groups with former offenders and counselling groups with men who have a history of violence against women.

She also spoke to prisoners, prison officers and probation workers, and did a week-long training course with Safe Ground at the National Offender Management Unit.

The play has already been performed in Barnsley, Bradford and Doncaster and will also be performed at the Hope Mill Theatre in Manchester on 27 October and Carriageworks Theatre in Leeds on November 3 and 4.

It’s also due to be performed in prisons across the North, including HMP Leeds in Armley.