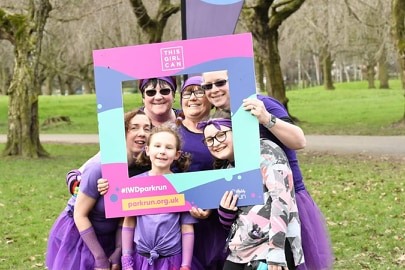 I’m a regular parkrunner and it was an absolute joy to go to my local event and find out why parkrun is so special to the women who run and volunteer as we celebrated International Women’s Day, writes Samantha Stewart.

I caught up with Heather Hopkins and Karen Nelson just before the start – they were resplendent in their purple tutus – and asked what parkrun meant to them. Heather said:

“It makes me feel powerful and sets me up for the week. Armley parkrun has become a very important place for me on a Saturday morning. It’s brought me back to myself, body and soul.”

“Everyone’s so friendly, it makes me feel alive.”

Angela started running to support her sister who was training for a race for Epilepsy Action, Angela had never done any running before and now runs three times a week and has given up smoking for a year! She had this advice for anyone considering coming for the first time:

“Take the plunge and you’ll never look back, don’t look at it as a challenge that you’ve got to run, you can walk.”

“The best thing about this is the community feel and how lovely people are, I cannot even say how welcoming. It’s awesome, it’s off the scale, it has changed our lives.”

Michelle Gittins is the Event Director for Armley. Today she was running with her daughter Ava. She said:

“I don’t run very often, I mainly volunteer. I absolutely love volunteering, we get to come down here, see people running round the park, socialising, making each other feel good, building each other’s confidence.

“It’s a fantastic way to start the weekend. Hopefully IWD parkrun will encourage more women to take those first steps.

“Once they’ve done their first parkrun they’ll be hooked and part of the parkrun family.”

And we were off! Three laps of the park and through the finish funnel and then I had the opportunity to speak to Diane Dawkins who is a parkrun regular who had run today with her five year old daughter Sibella. She said:

“Parkrun means being part of a local community and getting out on a Saturday morning with my daughter. We love volunteering, we’re Tailwalking next Saturday!”

There’s always a Tailwalker at parkrun. This volunteer has the job to be the last person over the finish line so that organisers know all athletes are safely though. It also means that however long it takes you to complete the 5km you won’t be last!

Mary McAree lives close to Armley Park and awoke on the Saturday of the second ever parkrun at Armley 18 months ago, wondering why there were people parking in her street.

She discovered that parkrun had arrived! Mary registered that evening and the following Saturday she walked the course for the first time. She said

“Let’s just say, it’s transformed my life. I really mean that in every way, shape and form.

“It has taken me from just being able to walk to being able to run a 5k and a 10k. It has improved my mental wellbeing, I’m so much fitter.

“I’m 3.5 stone lighter than I was two years ago. I was told I was pre-diabetic; I’ve managed to reverse that. It’s been amazing. I don’t have a massive friend base here in Leeds but I come out here and get chatting to people, it puts me in great form for the day.

“The people who have set this up, like Michelle, have done a tremendous job. It’s wonderful to see what they’ve done, not just for the park but for Armley in general.”

I will be back next week, inspired and supported by all the awesome women who run and volunteer at Armley Park every Saturday morning at 9am. Give it a try, it might just change your life!