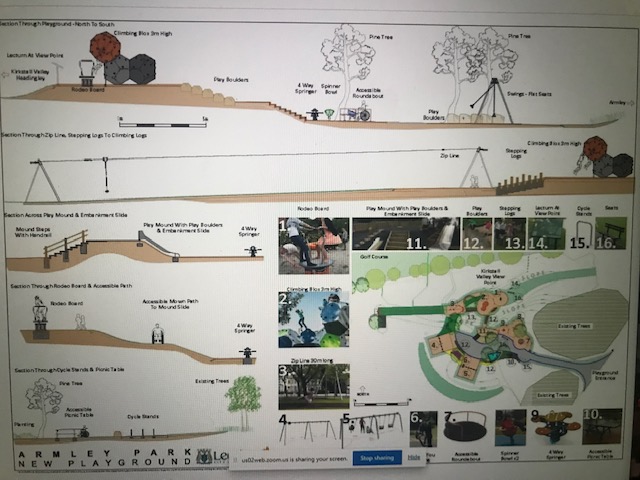 A campaign to improve play facilities for youngsters in Armley Park is set reach its conclusion when work finally starts on a new playground next month.

Residents attending the online Armley Forum meeting heard that work will start on site during the week commencing 11 October 2021 and is likely to be completed by February 2022.

The playground will move from near the entrance to the park to above the existing football pitches in the north of the park.

New equipment will include climbing blocks, a zip wire, play boulders, roundabout, slide, swings, a rodeo board, a four-way springer and a platform with views over towards Kirkstall and Headingley.

The council has been working with the Friends of Armley and Gotts Park to replace the existing run-down playground. Leeds City Council landscape technical manager Kieron O’Hara said:

“This is good news. I appreciate this has been a long time coming, but it’s full speed ahead going forward. Hopefully we should have a fantastic new play area for the children for next Spring.”

There had been a number of delays to the project, most recently the Coronavirus pandemic.

Cat Hyde, from the Friends of Armley and Gotts Park group, welcomed the developments. She added:

“Thank you. We really appreciate the update. It’s great to see this is actually happening. Thank you to Councillor Lou Cunningham for her persistence in this matter. Getting it to this stage has taken us 10 years.”

Cllr Cunningham thanked the Friends of Armley and Gotts Park groups and the wider community for taking part in the public consultations carried out over the past year.

An informal play trail has been installed by Leeds City Council as a temporary measure until the new playground is complete.