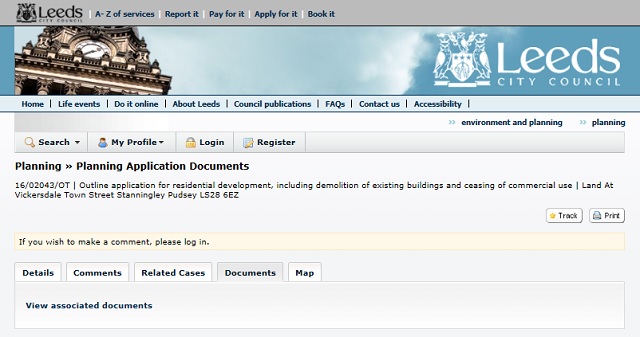 Retrospective plans for a dog walking park in Pudsey have been refused due to concerns about noise nuisance.

Jack Marston, of Farsley, had applied to change of use of land at Waterloo Mills to a dog walking park, including laying out of hardstanding area for parking and enclosed dog exercising facility.

But council officers say the plans, off Waterloo Lane, are unacceptable. A planning officer’s report states:

The Local Planning Authority consider the location of this proposal, between residential properties on Lordswood Grange and Wellington Grove, is not … acceptable for the proposed use.

“The proposal is likely to lead to excessive noise from barking and dog behaviour which would be difficult to control and minimise, given the outdoor nature of this proposal.

“The impact would be exacerbated during summer months when residents are likely to require windows to be open for ventilation or for outdoor use of garden areas.

“It is not considered that planning conditions could be used to mitigate any of the potential impact due to the outdoor nature of the use, and the unpredictable behaviour of dogs being accommodated together, particularly if the groups of dogs is ever changing.

“For all of these reasons, it is considered that the proposal would have a significant adverse impact on the living conditions of the adjacent residential occupiers .”

The council report says the dog walking park is not open to the public to attend, but is a private facility where dogs are collected from people’s homes and brought to the site.

The applicants state there are no more than six dogs at any one time at the site, and there is one member of staff who supervises the dogs.

Plans can be viewed in full here.