It’s understood there will be a series of events around the opening of the £29 million scheme, which links East Leeds through to Bradford. We’ll bring you more details when we have them.

CityConnect is funded through the Department for Transport’s Cycle City Ambition Grant. This fund is ringfenced for spend on cycling improvements.

It’s hoped the cycle superhighway will bring about increased levels of cycling and walking through improvements to local infrastructure and activity to enable more people to access to a bike. 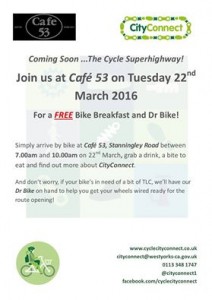 Meanwhile, a special breakfast event is being held on Tuesday, March 22, at Cafe 53 on Stanningley Road, Armley.

“The Cycle Superhighway is almost finished and we’d like to invite you along to Café 53, which is slap bang on the route, for a free bike breakfast. Simply arrive by bike and enjoy a drink and a bite to eat on us.

“We’ll be on hand to answer any questions, and to offer advice as to how you can get involved. Don’t worry, if your bike’s feeling a little unloved, we’ll also have Dr Bike on hand to sort out any little niggles. We hope to see you there.”

Free coffee and a bite to eat anyone? We've got a Bike Breakfast coming up @Cafe53Leeds, why not pay us a visit? https://t.co/lPikMZTDow