181 finishers at Bramley parkrun – and one marriage proposal! 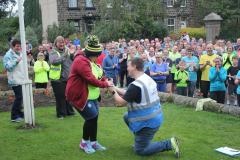 It was an eventful Bramley parkrun at the weekend, particularly for one local couple.

The weekly event attracted 181 finishers, including 11 people who had never done parkrun before.

But it was extra special for one couple as Rachel Fisher accepted Paul Hollings’ romantic proposal to a round of applause and a big cheer in Bramley Park before the parkrun.

“It was every so lovely to see it happen in front of everybody – we won’t forget it for quite I while, and I’m sure they won’t either!”

The couple received lots of best wishes on the Bramley Parkrun Facebook page.

“Congratulations to you both. So lovely!”

12 running clubs were represented at the event, with 25 people gaining a personal best.