The future of land dubbed a ‘green lung’ between west Leeds and Bradford has been secured by Leeds City Council.

Following detailed negotiations, the council has taken ownership of football pitches and associated recreational land at Woodhall Playing Fields on Woodhall Lane from the University of Bradford.

By owning the site between between Pudsey and Calverley, the council say they have safeguarded the future of the greenspace and protected it from unwanted development.

The future of football pitch provision has also been secured and, as the site adjoins Woodhall Lake Leeds Nature Area which is already managed by the council, the deal creates a significant sport and outdoor recreation opportunity for use by the local community. The council is also currently negotiating further woodland and greenspace acquisitions in the area.

The council will now manage the playing field site, which provides six pitches and changing rooms and car parking.
As part of the arrangement, the University of Bradford will continue to be able to use the pitches on Wednesday afternoons for student matches, as has long been tradition. 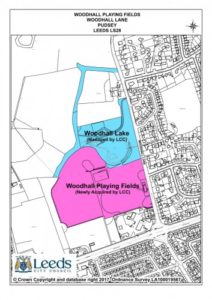 “After long and complex negotiations, getting this deal done was important to secure the future of this area of vital greenspace. Not only does it offer more potential use for sports teams across west Leeds, where we know sports pitches are limited, it also safeguards the site from unwelcome development.
“As the site is next to Woodhall Lake, under our guardianship the whole area will now be managed in a more joined-up way, ensuring that this important ‘green lung’ between Leeds and Bradford has been safeguarded for the future.”