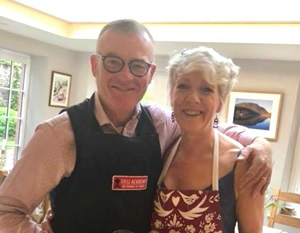 An enterprising West Leeds family have set up a veg box delivery service in just two days – after the lockdown left some families unable to get fresh fruit and veg.

Kirkstall’s Jules and Simon Love, their son Sam Love and his wife Chloe in Bramley are rushed off their feet with HomeVegBox.com, which delivers to much of west Leeds twice a week.

And to make it a truly family affair, they’ve been joined by Julia’s brother Philip Cave and girlfriend Lou in Armley.

Simon is a healthcare trainer and says that he realised there was a glut of fresh food at wholesalers after all the restaurants shut their doors last week.

“More importantly”, he added, “families are either unable or unwilling to go to the shops, especially if they’re in vulnerable groups.”

Jules added that the whole family was anxious to put supporting the community at the heart of the new venture. Jules said:

“We chose to keep the focus very local, and for every ten fruit and veg boxes we sell, we give one to Armley Helping Hands, which is providing vital help to local families.”

Within two days the enterprising family had set up and launched an online shop, set up relationships with producers and suppliers, organised the order processing and taken their first orders. Chloe said:

“We were amazed at the positive response. On the first day we took 50 orders, and we’ve already filled all the slots on our first delivery day on Tuesday. Most of the referrals have come from amazingly supportive local Facebook groups.”

The website was up and running in just 36 hours thanks to Armley-based Philip, Jules’ web designer. He said:

“It was great to feel that we were contributing something positive to our community, and I can use my skills for something really positive.”

With girlfriend Lou handling the administration, order processing and invoicing, it’s been a cooperative effort.