West Leeds residents can have their say on the latest stage of proposals to improve the bus network between Bradford and Leeds.

The proposals cut through the heart of the west of the city, affecting Thornbury, parts of Pudsey, Stanningley, Bramley and Armley.

Leeds City Council has set a target of doubling the current 250,000 bus trips made in the city per day within 10 years and is wanting to hear people’s views on plans to introduce new infrastructure, including bus priority measures.

A consultation document released by the council says:

“Together, our proposals are capable of reducing bus journey times by up to 15 minutes at peak times, making bus journeys more reliable and attractive for the 12,000 people who travel along the route by bus each day.”

Details of the consultation can be found here.

People are being urged to give their opinions on the latest proposals in order to shape final plans for improvements.

Here are the proposals in detail, with links through to more information:

The council says their proposals will make journeys for all users an average of four minutes quicker. 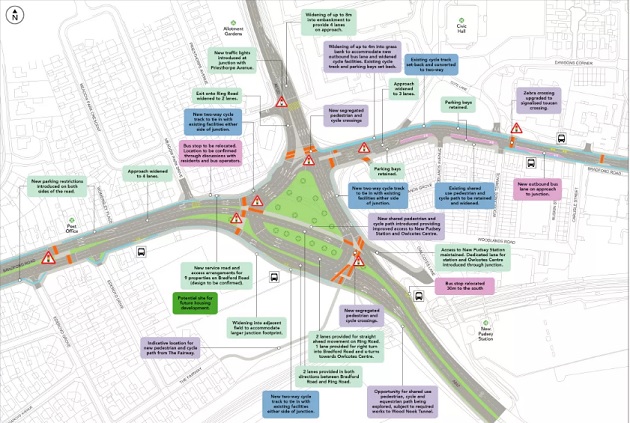 The council says proposals will help to eliminate bus delays of up to 10 minutes for services on this stretch of road.

Proposals include converting the left lane in each direction to a bus lane and restrict on-street parking during the hours the bus lane is operational.

In a bid to save two minutes’ bus journey time, proposals include:

In a bid to save five minutes’ journey time for all traffic and the elimination of bus delays of up to 15 minutes, proposals include:

“Surveys show one in three vehicles using the ‘2+’ lane are doing so illegally and enforcement by the police has not been effective. This delays all traffic as motorists using the right lane are forced to give way to traffic merging at the end of the ‘2+’ lane section.”

The cycle superhighway will be untouched.

Proposals up for consultation aim to make average journey being four to five minutes quicker for all traffic, a higher quality pedestrian environment and a new gateway to Armley. 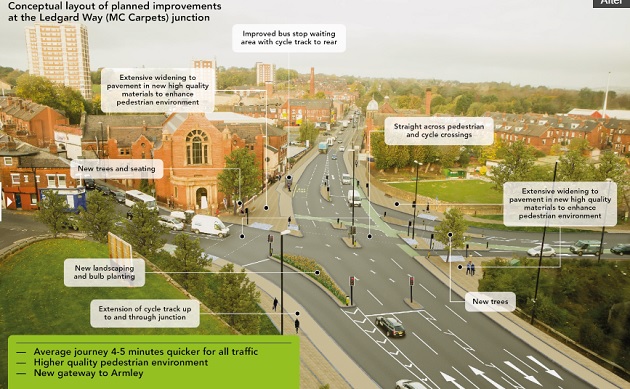 The proposals will eliminate bus delays of up to 18 minutes:

To have your say on these plans at this stage of the design, submit your comments by 14th December 2018.