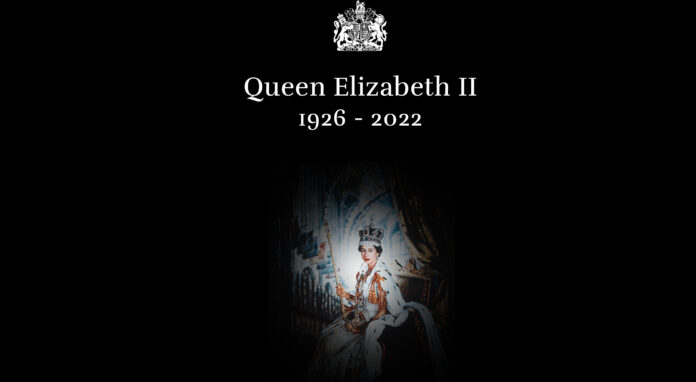 Queen Elizabeth II, the UK’s longest-serving monarch, has died at Balmoral aged 96, after reigning for 70 years.

In a statement, Buckingham Palace said: “The Queen died peacefully at Balmoral this afternoon.

“The King and the Queen Consort will remain at Balmoral this evening and will return to London tomorrow.”

Tributes have been paid this evening.

Civic and town hall buildings will be lit in purple during the hours of darkness from tonight and throughout the official period of mourning.

The Lord Mayor of Leeds, Councillor Robert Gettings, said: “I am very sorry to hear that Her Majesty Queen Elizabeth II has died. She worked tirelessly during her reign, representing the nation, attending official state visits abroad as well as spending a huge amount of time travelling around the country visiting charities, hospitals and organisations to meet and listen to the people she served.

“I know from her last visit to Leeds when the crowds lined Briggate to see her on her visit to the newly refurbished City Varieties Music Hall how much people respected and admired her, and so on behalf of the people of Leeds I have expressed our formal condolences in a letter to the new Sovereign’s Private Secretary to be passed to the new Sovereign. Flags on civic buildings have been lowered to half-mast in tribute.

“It is at times like this that the city comes together, and I know many will want to pay their respects and honour Her late Majesty Queen Elizabeth II.”

Leader of the Council, Councillor James Lewis, said: “We were deeply saddened to hear the announcement from Buckingham Palace that Her Majesty Queen Elizabeth II has died. I know many of our residents will be feeling a sense of deep shock, sorrow and grief.

“Her Majesty Queen Elizabeth II dedicated her life in service to this country. She is the longest reigning monarch in our history, and the only monarch many of us will have ever known; having celebrated her Platinum Jubilee marking 70 years on the throne this year. Civic and Town Hall buildings will be lit in purple during the hours of darkness from tonight and throughout the official period of mourning in recognition.

“Her late Majesty Queen Elizabeth II had a strong association and connection with Leeds and left a lasting legacy on the city and its communities during her memorable visits and occasions, which crossed different decades and generations. As well as her own family ties with the estate of Harewood, she undertook tours for her Coronation in 1952 and Silver and Diamond Jubilees in 1977 and 2012 respectively; when she also honoured the city by officially launching our Child Friendly Leeds commitment.

“A number of iconic Leeds institutions were included in her royal visits across seven decades on the throne including Roundhay Park, the Burton’s Factory, Leeds Art Gallery, the Emmerdale set, Elland Road and the Royal Armouries. She also opened the Seacroft Civic Centre where she took the time to speak with residents and council housing tenants. I’m sure that people across the city will join us at this time in paying their respects and remembering her many years of service to the city and the country. Our thoughts are with them, and with His Majesty the King and the other members of the Royal Family.”

Pudsey MP Stuart Andrew posted his tribute on social media. He said: “May Her Majesty Queen Elizabeth II rest in peace, and her family be comforted by the gratitude of a grateful nation for a remarkable reign. This is a truly sad day. God Save The King.”

Leeds West MP Rachel Reeves added: “My heart goes out to the Royal Family as we mourn the passing of Queen Elizabeth II. HMQ dedicated her life to our country, and touched the lives of so many. Her dignity, strength and devotion have united us through so much, and delivered a extraordinary service to the nation.”

Tributes have also started to come in from local organisations.

We are saddened to hear the news that Her Majesty Queen Elizabeth II has passed away. We offer our deepest condolences to her family.

Everyone at Farsley Celtic joins the nation in mourning the passing of Her Majesty Queen Elizabeth II.

Our thoughts and condolences are with the Royal Family. https://t.co/pJIOD6Rty4

We pray for the repose of the soul of Her Majesty the Queen. May she rest in peace 🙏 pic.twitter.com/ZJTVgH1Dap

Sunny Bank Mills in Farsley tweeted: “Sunny Bank Mills sends sincere condolences to the Royal Family at the the passing of Her Majesty The Queen. As a mark of respect, we are very sorry to announce but our Heritage Open Day events are postponed for the time being.”

Sad news from Balmoral of the death of HM The Queen. She devoted her entire life to public service and will be sorely missed.