The sound of honking horns, squeaking breaks and the fast ebb and flow of traffic are a given for those working in and commuting around Stanningley Bottom.

Phil Townsend, proprietor of Philip Nicholas barbers, is at his wits’ end over the mini roundabouts – known as roundels – that were built as part of the Cycle Superhighway which links Bradford and Leeds.

He argues that the council has ignored the suggestions he made to reduce accidents on the road, despite his 2,000-strong petition to get the roundels changed.

ANNA RILEY went to Stanningley Bottom to find out how the council is looking to tackle traffic problems in the area – and whether the new measures will go far enough.

Leeds and Bradford councils approved the CityConnect cycle superhighway along with the West Yorkshire Combined Authority when Leeds hosted the Tour de France Grand Depart in 2014.

The aim of the scheme – dubbed the ‘highway to health’ when it was announced – was to encourage more people to cycle and live healthier lives.

The £29 million superhighway was intended to protect cyclists from the road and give them priority over cars at side road junctions.

The 23km track runs from Church Bank in Bradford to Leeds city centre via Stanningley, Bramley and Armley.

The stretch has been fraught with difficulties since it was unveiled in June 2016.

Complaints have ranged from condemnation of the bollards and utilities boxes built in the middle of the path to grumbles over motorists who have used the track as a parking space.

Phil Townsend, whose barber shop faces on to the Stanningley Bottom roundels, says he has seen many near misses outside his shop and is worried for the safety of both cyclists and motorists using them.

According to CityConnect, instead of isolating pedestrians, cars and bikes, the two roundels at Stanningley Bottom (that have no road markings or signs) were created to influence driver behaviour.

This is through establishing an environment that takes the attention of drivers away from road markings and signage and reliance on signals and is meant to allow driver to make their own decisions by reading the situation. The roundels and shared space were based on the scheme in the town of Poynton in Cheshire.

But Phil thinks that the lack of signage has created a hazard, due to nobody really knowing how to use the roundels.

He says the council have done nothing to alleviate safety concerns he raised in a petition signed by 2,000 people in September last year, as reported by the Dispatch.

“The roundels are an absolute death trap. Nobody really knows how to use them and I’ve seen so many near misses outside my shop.

“The honking of car horns is the soundtrack to my week and I’m really worried for people’s safety who are using the road.

“The area is meant to be a shared space between motorists, cyclists and pedestrians, but the road here just isn’t wide enough for it.

“I suggested some ways in which the roundels could be improved in order to save lives and prevent accidents, but the council haven’t really listened.”

He thinks that the roundels should be coloured and that ‘rumble strips’ should be painted on the approach to them.

Phil also argues that signage should be displayed which highlights that there are two roundels rather than one, along with an electronic sign, showing people their current speed on the approach to the roundels in order to encourage them to slow down to the speed limit of 20mph.

Watch here to see more of what Phil had to say:

“Enhancement works are currently being developed for Stanningley Centre with the aim to improve driver compliance with the 20mph speed limit. This will involve replacing the existing contrast surfacing with a raised central margin with some textured material along the kerbside.

“Due to the nature of the special materials needed to complete these works, it has not been possible to carry these works out over the winter. With the dryer weather now here we are looking to have the works on site as soon as our contractor is available.”

“It has taken a frustratingly long time to implement the changes at Stanningley Bottom following the feedback.

“I have been chasing for when the implementation will be, as we still don’t have a date.

“People do get confused at the roundels and don’t really know who has to give way.”

The proposals can be seen below and the changes include textured over-run areas, together with a larger central margin to make sure motorists are aware when they drive over them. 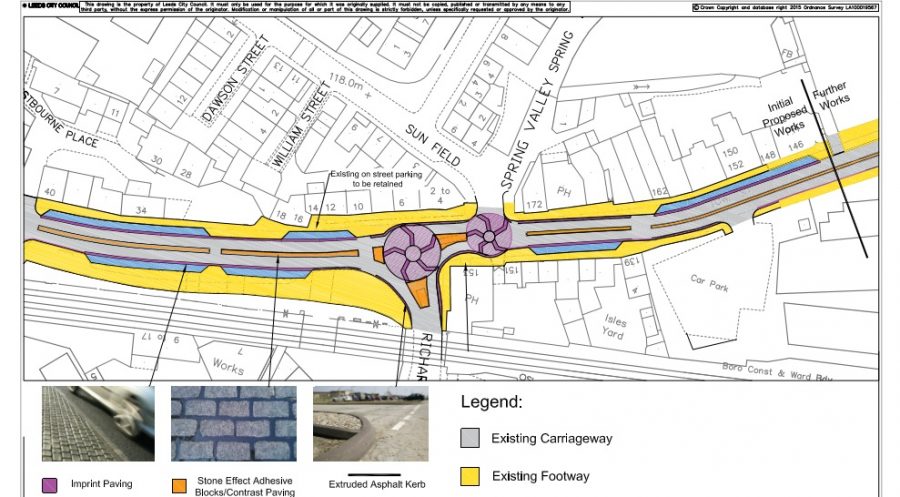 It’s hoped the changes should motorists’ speeds on the approaches to the roundels so that by the time they are negotiating the un-marked junction they are driving at slower speeds.

“The proposal requires some new materials to be laid onto the carriageway to create the textured surfaces and low upstands which will encourage drivers to slow down through this area.

“This requires the surface of the existing road to be dry and clean of contaminants, and so the work has been kept back until the end of the winter gritting season.

“We are now looking to programme this work as soon as we can, and to make arrangements to inform businesses and the local community.”

What do you think? Will the proposals help tackle to problems? Have your say in the comments below.

UPDATE: 24/4/17 12.18pm: For the sake of clarity, this article has been amended to remove mention of concerns over the width of the cycle superhighway as the issue was not specific to problems at Stanningley Bottom.