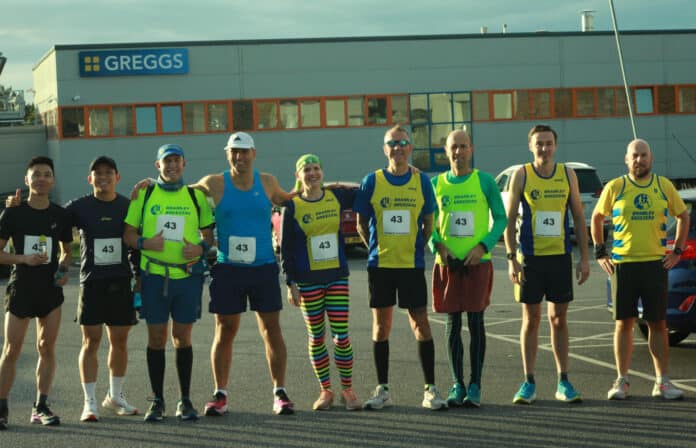 Sunday was run day to help raise money for the family of tragic Grant Chakas.

Runner Yacine Sahel (Yaz) was joined by Grant Chakas’ work colleagues at Greggs and members of Bramley Breezers to complete a 43km run in memory the dad of three who passed away last month.

As previously reported, Yaz was so affected by Grant’s death he felt he had to do something to commemorate Grant’s life and to support his young family.

Yaz provided bibs with the number 43 on for those completing the full run.

The 43km run started at PureGym at 8am, prompted by Grant’s brother.

Dean Ward, a friend to them both, was running the support for refreshments and water. There were seven refuelling points in total.

Runners joined at the half way point just outside of the Raddison Hotel (on The Headrow). Runners also joined at different points – 10k The Barge at  Rodley and 8k at Pudsey police station. Many joined at the final 5k around Bramley Park.

At the finish line there was a large crowd, along with Brian, Greggs’ employees and Bramley Breezers, to celebrate their achievement.

Greggs bakery kindly provided refreshments at the finish line for runners and supporters.

Yaz has set up a Gofundme page for anyone wishing to donate. As this article was published, more than £1,000 had so far been raised.