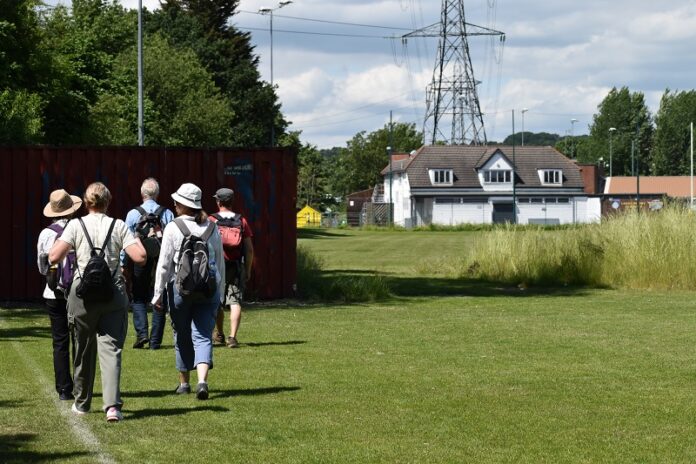 Many people who use a number of footpaths in Kirkstall are not aware that they are at risk of becoming blocked over the coming years.

They could be taking their children to school one day and find their way closed by a private fence or new housing development. These are often not paths that have been forgotten about and overgrown, but are paths that are used every day.

Unlike many paths in the outer regions of Leeds, these more inner-city paths have not been made ‘definitive’ by Leeds City Council, meaning they are not recorded on Leeds City Council’s official Definitive Map of Rights of Way.

Residents have until 2026 to record these paths before they are lost. At least 20 people need to have walked and notified the council that it is in use through submitting a ‘Public Rights of Way Evidence Form’ to allow the path to be officially recorded.

Kirkstall Valley Development Trust have ‘stepped’ up to the challenge of making sure these non-definite paths get recorded by 2026.

As part of their ‘Save Kirkstall Footpaths’ campaign, local residents have been joining the weekly ‘Wednesday Walkers’ group, visiting different areas of Kirkstall, walking the ‘at risk’ footpaths and completing a Public Rights of Way Evidence Form.

Whilst helping to save the footpaths, the walkers have discovered some beautiful places of Kirkstall, and enjoyed the social and health aspects.

Anyone is welcome to join the walk* that takes place for an hour every Wednesday lunchtime. It is an informal group led by one of KVDT’s volunteers. You can find out more and sign up for free here and information about the location and meeting points will be sent in advance.

Cllr John Illingworth (Lab, Kirkstall) has been championing access in the Kirkstall Valley for many years. He said:

“Walking and so using the footpaths is a low cost form of exercise, open to everyone and has huge benefits for health.

“This walking group, organised by Kirkstall Valley Development Trust, is really important in terms of positive health impacts and also the saving of the footpaths.

“The cut-off date to register the footpaths for public use is 2026; footpaths that haven’t been registered can be closed down so we need to take action quickly.”

For anyone who is interested but unable to attend, walking guides of the Wednesday walks are being created by a KVDT volunteer for people to download. The guide features a map of the route, local wildlife to spot along the way, and nature challenges. Take a look at the Morris Wood Walkers Guide.

Paul Holdsworth, Kirkstall Neighbourhood Forum board member, said it was important to get out and about in Kirkstall. He said:

“Recent research has found that, even if you are not particularly interested in nature and wildlife, spending just a short time outdoors in green open space has beneficial effects on mental and physical well-being.

“The amount of green space on one’s doorstep is, I think, one of the best things about living in Kirkstall.  Places such as Gotts Park, Kirkstall Valley Nature Reserve and Kirkstall Abbey Park are all close at hand and the green space extends up the Aire Valley to Rodley and beyond.

“This makes Kirkstall particularly rich in wildlife for somewhere only a couple of miles from the city centre.

“Explore pretty much any of the footpaths and tracks in and around the valley and you will soon find yourself away from the traffic and bustle, and surrounded by nature in all its glory.  However, you will also discover that some paths gradually peter out or become increasingly overgrown or steep, or are constrained by the river or railway line.”

Paul encouraged people to discover the paths for themselves and added:

“A more serious problem is that even those paths shown on Ordnance Survey maps are not currently afforded protection by the city council, as they have not been added to the “Definitive Map’, which is the map used as a reference for the council’s planning decisions.

“I’d like to say a big thank-you to KVDT for all the help they have given me and Kirkstall Neighbourhood Forum in raising awareness of this issue and encouraging local residents to discover these often delightful paths, and help us to get them properly recorded on the Definitive Map so that future generations can enjoy them too.”

You can see a list of the ‘non-definite’ footpaths in Leeds on the council website (under PROW). Those marked in green are known about but not officially adopted – despite some of them being signposted. The only paths definitively recorded, and therefore protected, are the black ones.

*Whilst often not strenuous, some of the footpaths have limited access, uneven ground or are overgrown in parts.