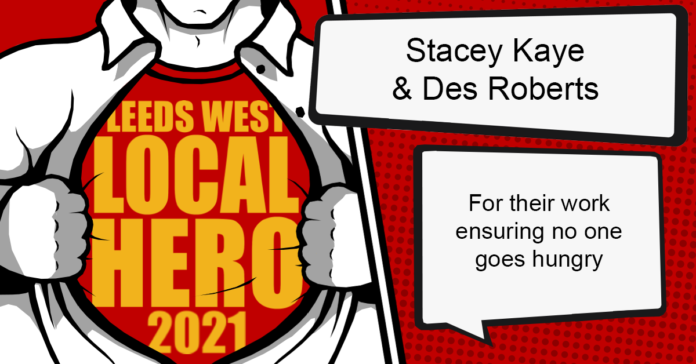 This year’s Leeds West Local Hero Awards draw to a close this week – and the final recipients are Stacey Kaye and Des Roberts.

This hard-working couple run a ‘community kitchen’ from their front garden distributing donated food they collect from four different supermarkets.

The community kitchen project was originally started by Alison Gordon (who will also receive a certificate from Leeds West MP Rachel Reeves) but when she could no longer continue Des and Stacey stepped in.

Since taking on the community kitchen they have also started a coffee morning from their front garden. People come along for a chat and a coffee, which is particularly helpful for anyone feeling isolated or lonely. Stacey and Des are now on the look out for gazebo to cover the food when it rains. If you know anyone who might be able to help with this, please contact rachel.reeves.mp@parliament.uk

The Kirkstall resident who nominated Stacey and Des also wanted a ‘shout out’ for a few others who help in the area – mostly working with/from St Andrew the Apostle Church on Butcher Hill.

There are several individuals who help with the efforts to keep the community fed, including Caitlin, daughter of Cherie Cartwright, one of last years’ award winners.

The church itself will also receive a certificate – in recognition of everyone who helps with their efforts to support local people – one such example was the distribution of Easter eggs across the Hawksworth estate earlier this year.

“When I started the Leeds West Local Hero Award last year, it was meant as a short term initiative highlighting the great work that was being done locally during the worst months of the pandemic.

“It is a testament to our community that this work continues day in day out. Individuals like Stacey and Des, along with organisations such as St Andrews, make a real difference and I am delighted that they are receiving this year’s final award.”