Can you name these men? Police issue CCTV after Pudsey assault

Police have released CCTV images of men they want to identify after a man assault in Pudsey. 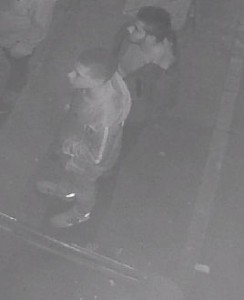 The victim, a 23-year-old man, was knocked unconscious when he was punched and kicked by a group of males in Lowtown after leaving a nearby nightclub in the early hours of Saturday, December 19.

He was taken to Leeds General Infirmary for treatment to serious facial injuries.assault cctv

“This was a particularly violent attack by a number of suspects that left the victim unconscious and seriously injured. I would like to hear from anyone who recognises the men shown in the CCTV images or who has any information that could assist the investigation.”

Anyone with information is asked to contact DC 6736 Gilsenan at Elland Road via 101 quoting crime reference 13150520300 or call the independent charity Crimestoppers anonymously on 0800 555 111 FREE.