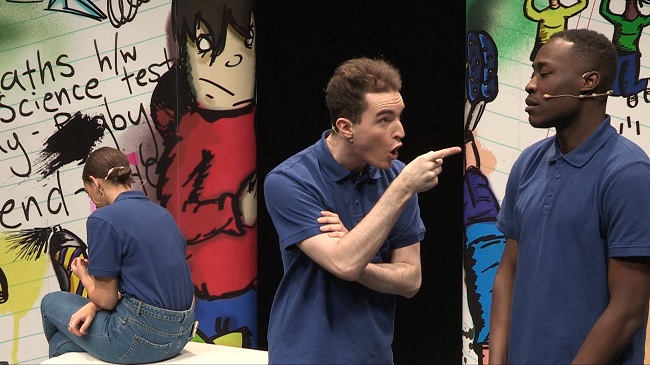 Pudsey students are receiving a hard-hitting lesson on the risks of under-age drinking as part of an award-winning programme that will reach 35,000 students across the UK this year.

Secondary school students, aged 12 to 14, at Pudsey Grangefield will watch a play about a group of friends who find themselves in trouble as a result of their misuse of alcohol.

The performance is followed by an interactive workshop where pupils will be invited to probe the cast on any of the issues brought up during the play and explore the consequences portrayed by the actors.

The performance is part of ‘Smashed’, an alcohol education and awareness programme delivered by Collingwood Learning  and sponsored by Diageo, a global leader in beverage alcohol.

The tour will visit 90 schools in eight regions across England, reaching around 14,500 students. The programme has reached 400,000 pupils in 2,040 schools across the UK since it began in 2005, and is now delivered in every continent.

“I’m pleased pupils in Pudsey will be given a better understanding of the problems surrounding underage drinking. It’s an opportunity to internalise vital life lessons early on. Thanks to ‘Smashed’, for bringing their one-of-a-kind workshop to Pudsey Grangefield School.”

“This is a real change from the usual classroom lesson and makes the risks of underage drinking impossible to forget.

“We help teachers carry these lessons forward by delivering Personal, Social and Health Education support after the visit, and offer parents free online support materials. We’re thrilled to be supported by Diageo and to be heading to 90 schools, visiting 14,500 students, in the first England tour of the new decade!”

‘Smashed’ is a theatre education programme led by Collingwood Learning and sponsored by Diageo. The scheme has been developed in consultation with young people and helps schools educate young people to understand the facts, causes, and consequences surrounding alcohol misuse.

This year the programme appears in 90 UK schools and has reached 400,000 pupils across the UK since it began in 2005.