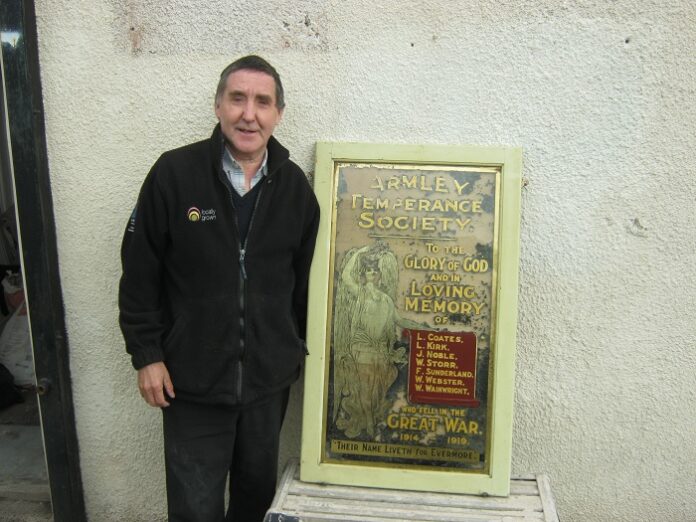 An old war memorial has been discovered by workers in a building renovation project in Armley, writes Andy Dalton.

It bears the names of six members of the Armley Temperance Society who lost their lives in the First World War.

Volunteers working on the renovation of the Mission Room in Mistress Lane, Armley found it buried underneath items of rubbish in the loft.  The premises have recently been acquired by Leeds City Mission.

The building is being completely renovated to make it suitable for community activities.

In recent weeks volunteers have gutted the building and have been busy constructing new walls rooms and kitchen to create a contemporary suite of rooms which will facilitate community projects.

When completed it will have a multi-purpose hall, office, charity shop, school uniform bank, shower, emergency food supplies and other projects.

The Mission Room was built in the 1920s.  Their enquiries to date reveal that the Armley Gospel Temperance Society transferred from their former chapel premises in nearby Wesley Street in the 1960s.  The War Memorial would have been brought along with their other items in the move.

The War Memorial is in a wooden frame and the names of the fallen soldiers can be clearly read.

The War Memorial will be on display outside the Mission Room in Mistress Lane, Armley from Monday – Friday 9 – 13 November (weather permitting).

Local people can see this as they pass on their way to the shops and can view it at a safe social distance. Leeds City Mission welcome any information from local people about the soldiers whose names are featured on the Memorial

As Remembrance Sunday approached that it was important to recall the wartime service of local men who served in the armed forces.

These were all local lads who served their country and never came home. We should never forget that the freedom we all enjoy was bought by the sacrifice they made all those years ago.